Nyakhot Deng, 29, her husband and three children fled the war in South Sudan in 2014 when the conflict arrived at their door.

“We saw women and children being killed,” she says, sitting in the shade of a fenced-in compound of several small, round thatch-roofed homes in a refugee camp called Tierkidi in western Ethiopia, about 50 kilometers from the South Sudan border. “We decided to leave because I did not want my children to be killed.”

She and her family are receiving food, clean water, and other aid here. Her husband even got a scholarship to attend university.

But one crucial basic service was missing: They had no latrine, and taking care of their needs out in the open was presenting some serious problems.

For one thing, just going out into the bush was not safe for women. “At night people would wait and then attack people,” Deng says.

The lack of basic facilities also presented ongoing health problems. “We suffered from diseases,” Deng says. “My children had to go to the clinic with typhoid and diarrhea.”

Deng needed a solution to these problems, and she was ready to solve them herself.

Meeting the need for basic sanitation

Tierkidi camp is one of seven where more than 375,000 refugees from South Sudan are now living. Nearly 90 percent of them are women and children, most of them arriving since violence broke out in their home country in 2014.

Oxfam is leading the effort to provide clean water and sanitation services to people living here, and is also promoting good hygiene practices. In addition to overseeing the supply, treatment, and piping of water to the seven camps, Oxfam is also building latrines, finishing 8,600 so far, more than 1,000 in the last year. Refugees have helped to build more than 300 latrines in 2022.

But there are still not enough: Only 25 percent of households currently have access to a latrine.

A complicating factor is that many of the toilet facilities Oxfam has built with metal sheet walls and roofs have been disassembled, the metal sheets sold for money by people in need of food, clothing, and medicine. Others have fallen into disrepair due to a lack of proper maintenance by the users.

Oxfam changed construction materials, exchanging metal sheets for bamboo — which is less likely to be stolen. Local staff also held meetings with residents in Tierkidi to talk about latrine alternatives, hygiene, and the importance of handwashing and its role in preventing diseases. These were informal “tea talks,” according to Lul Tut, an Oxfam public health expert. The residents shared a cup of tea and talked about alternatives to Oxfam-built latrines and what role they could play in meeting the need for basic toilets in the camp.

When asked if they could propose a latrine design they could build themselves, several residents made suggestions based on traditional building techniques. Their design resembled their homes: round shelters with thatched roofs and mud walls. This simple-pit latrine design could use similar material, along with a concrete slab from an out-of-commission toilet to cover a three-meter-deep pit.

“Simple-pit latrines will last longer if they are maintained properly, and people are more likely to do that if they have built it themselves,” Tut says.

Nyakhot Deng says “I was motivated to build the latrine because I wanted to improve our health.” She says her commitment came “after training from Oxfam about how to prevent diseases.” A training session on latrine construction also helped her understand the process. She gathered materials from the nearby forest, mostly grass and wood, “which was not easy … and I got scratched up a lot," she says. Oxfam gave Deng a pole she cut into sections to frame the doorway and provide vertical support.

Deng says it was even more difficult to dig the pit to the required three meters (nearly 10 feet). “I tried to do it myself, but after two meters I reached a lot of rocks, and I hired someone to help me,” Deng explains. She recruited a young man to dig the last of the stony pit. “He completed the digging for me for 500 birr [about US $10].”

More than a month after completing the latrine, Deng says the money was well spent. “My children are now free from diarrhea.”

She also built a handwashing station next to the latrine: A simple stand, with a jug of water and a plastic container of ashes from a cooking fire to substitute for soap, which she is unable to afford. “Oxfam told me that if I can’t get soap, that ashes will work.”

“I built that,” she says of the handwashing station. “The children now wash their hands with ash, even when I am not here.”

Her only concern now is that her latrine is very popular: All her neighbors are using it, so she is struggling to maintain it properly and worries it will be filled up soon.

“I am telling others to build a latrine, to avoid overcrowding,” Deng explains, but quickly adds that she is happy that her latrine is helping everyone in her compound.

Your support helps refugees access basic sanitation, and fight inequality and poverty in more than 80 countries. 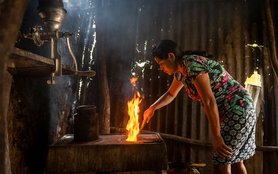 How much money would it take to end world hunger?