Grassroots leaders are the basis of Wacam’s strategy to help Ghanaian communities defend their rights and environmental resources. Hannah Owusu-Koranteng, who founded the organization with her husband Daniel in 1995, and which Oxfam has been helping to support since 2003, says they are particularly interested in getting women involved and trained as their research has shown that in some areas affected by mining, women have received only a small percentage of compensation paid out by companies and the government for land and other losses.

The main training is in Ghana’s Minerals and Mining Act, which accords citizen’s rights to fair, adequate, and prompt compensation for land lost to mines. Activists also learn how to monitor the negative environmental effects of mining, particularly pollution to water bodies by cyanide (used to separate gold from rocks), which is shockingly frequent in Ghana. “Wacam has carried out investigations in water bodies in mining communities,” says Hannah Owusu-Koranteng, while riding in a van from Ghana’s second city Kumasi to the capital Accra, just one of the scores of trips she makes every year to train local activists. “Out of the 400 water bodies we tested, 250 were polluted. We presented the report to the Environmental Protection Agency and they are doing an investigation. It also helped inform a recent assessment in which the EPA rated the mining companies, and all the mining companies in Ghana were scored poor or unsatisfactory.

“This has all emerged from the communities, where activists identify pollution sources, and we contract researchers to analyze the water bodies and come out with findings we present to the government.”

Informed communities now know what to do if they find dead fish in rivers and streams: collect and preserve samples to verify the presence of cyanide contamination, contact the Environmental Protection Agency, and negotiate compensation from the company responsible for the spill. Local activists are also trained how to communicate with the media, in cases where government and company responses to such accidents are slow or non-existent.

Oxfam also supports the legal aid organization the Center for Public Interest Law, (CEPIL), which assists communities pressing their grievances through the courts. CEPIL’s work has helped several communities get compensation for cyanide spills, including a $250,000 development fund from mining company Goldfields Ghana, agreed in an out-of-court settlement for the community of Abekoase in 2007. CEPIL is also helping plaintiffs in Dumasi press for compensation from Bogoso goldmines for a cyanide spill. This case has been in and out of court since 2004, and further delaying tactics by the defendant are trying the patience of community members.

It was in Dumasi where one of Wacam’s most energetic local activists emerged: Joanna Manu. Manu was one of the local farmers who learned about the cyanide spill in the nearby Aprepre Rriver in 2004, and went there immediately to collect dead fish and warn people not to touch or drink the water. She and her fellow activist Nii Anyetei pressed the case for compensation with the EPA and mining company.

Manu had also previously suffered the indignation of being arrested for farming her own lands, but successfully stood up in court and invoked the Minerals and Mining Act, pointing out to the judge that as she had received no compensation, the land did not belong to Bogoso . “I am farming that land still,” she told this writer in 2007.

In the meantime, Manu has pursued her studies, finishing high school in her mid-30s. She is now pursuing her ambition to become a member of Ghana’s parliament. She recently achieved a significant milestone on that road: she was elected to the District Assembly of the Western Region.

There’s a saying in the local Twi language in western Ghana, Adwem anu balofo tirmuI: knowledge is not only in the head of one person. “Wacam has taught me about the basic rights of people, their rights to own property, to information, to live as a human being. And that a leader has to listen to people, be humble before them, understand their issues, and that I have to have the courage, commitment, and confidence to represent them,” Manu says during a brief networking visit with other activists in the small city of Prestea, a gritty mining town near Dumasi.

For a community leader, especially a woman, to speak truth to power in Ghana, like many parts of Africa, is a challenge. Criticizing or challenging elders, or those in power, is risky – not only is it considered rude by many, it can lead to isolation. However in Ghana, there is a polite way to do this: one must seek permission to raise something publicly that might not be pleasant. This permission, called sebi, is a crucial way of working. “Wacam taught me how to do that,” Manu says.

In between villagers in her voting districts, Manu says she is setting her priorities for her work in the District Assembly. Chief among them is to ensure communities understand their rights in the face of industrial mining. “I know from my experience that when your land is taken from you, you will be jobless,” Manu says. “You will not get money to feed your family. I want the assembly to know about this so they will help people negotiate well, so they can get something for themselves.”

Why is clean water important?

Safe water, sanitation, and hygiene save lives during emergencies and in the long-term struggle against poverty. 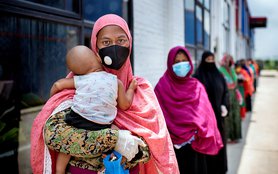 Two years of COVID-19: What Oxfam’s been doing

Oxfam’s global response to the coronavirus pandemic has reached across the world to help people survive, while also advocating for a People’s Vaccine.