Climate change is a human-made disaster that is already reversing progress made in the fight against poverty and inequality.

The climate change crisis affects all of us—across every community and every continent, but it is the poorest among us—those who are least responsible for the problem—who suffer the most.

How does climate change affect poverty and inequality?

At Oxfam, we know that climate change, poverty, and inequality are linked. The impact of shifting weather patterns, droughts, flooding, and storms hits poor and marginalized communities first and worst, causing unpredictable growing seasons, crop failures, and sharp increases in food prices. People in low-and lower-middle-income countries are around five times more likely than people in high-income countries to be displaced by sudden extreme weather disasters; and long standing gender, racial and economic inequalities mean that historically marginalized communities are the hardest hit and most impacted by the climate crisis.

Climate change contributes to fragility and the risk of conflict and disaster. Climate-fueled disasters were the number one driver of internal displacement over the last decade –forcing an estimated 20 million people a year from their homes. Hunger is already increasing due to climate change. People are being forced from their livelihoods, homes and communities due to climate shocks and persistent climate stress—indigenous peoples being among those at greatest risk of displacement. Climate change increases the need for life-saving assistance and protection for those facing humanitarian disasters.

We also know that climate change has worsened global inequality. Across societies, the impacts of climate change affect women and men differently. Women and girls must walk further to collect water and fuel, and are often the last to eat. During and after extreme weather events, they are at increased risk of violence and exploitation. These inequalities can be seen in many other, often overlapping, dimensions too. And because Black, Brown, and Indigenous communities are more likely to live in poverty, they face these impacts while having fewer resources to respond to climate-induced natural disasters and adapt to changes in the climate.

Our collective response to combat climate change must not only address the climate impacts, but also deliver systemic transformation that centers environmental justice in order to address the climate crisis as well as economic, gender, and racial injustice. We are dedicated to working with these communities to prepare for disasters and build resilience to adapt and find long-term solutions to climate change

Our Priorities for Climate Action

Despite declines in carbon emissions in 2020 linked to decreased travel during the COVID-19 pandemic, the climate crisis –which is driven by the accumulation of greenhouse gas in the atmosphere over time –has continued to grow. We need urgent and immediate action by rich countries and large corporations if we’re going to begin to reverse this trend and protect the climate.

The poorest half of the world’s population—3.5 billion people—is responsible for just 10 percent of carbon emissions, yet they are often the ones who suffer the worst. Wealthy countries and major polluting companies must commit to reduce their emissions in alignment with the Paris Climate Agreement to avoid further climate impacts that disproportionately affect the poor and vulnerable who contributed the least to the problem. In the next decade we need to take bold actions to limit the global temperature rise to 1.5°C. The failure to act now will lead to even greater costs later. These costs will be measured not only in dollars and cents but in lives lost to hunger, disasters, and increased conflict

Empowering the most vulnerable

Scientists have been clear: climate change is already affecting every sector and region of our country, of our continent, of our planet. But it is the world’s poorest and most vulnerable people –those who rely on rain to grow crops, live in fragile housing and who lack savings or insurance –who are hit the hardest, despite having contributed the least to the problem.

Adaptation is critical–particularly for small farmers who feed themselves and nearby communities and who are expected to play a critical role in global food security. Even with additional commitments to cut emissions, the impacts of climate change will continue to be felt by the world's poor for decades to come.

Wealthy countries must step up to do their fair share to enable the poorest and most vulnerable around the world to build resilience and thrive in the face of a changing climate, not just survive. This includes finance which is adequate, predictable, and accessible and commitments to respect and uphold the rights of impacted communities.

When natural disasters strike, they hit marginalized communities first and worst. And as women make up an estimated 70 percent of those living below the poverty line, they are more likely to bear the heaviest burdens. According to the United Nations, 80 percent of people displaced by climate change are women. At the same time, women are often left out of the conversation about adapting to climate change, even though they are sometimes in the best position to provide solutions.

Communities of color are also disproportionately impacted by climate change. A history of exclusionary zoning practices against Black, Brown and Indigenous communities in the United States has denied them access to well-resourced and planned residential communities, which has made them more vulnerable to the impacts of the climate crisis. Globally, these communities are more likely to be in flood zones, or surrounded by toxic facilities that pollute the air they breathe. Without adequate resources, Black, Brown, and Indigenous people are more likely to be displaced from their homes and face greater challenges in rebuilding their lives after disaster strikes.

Local expertise and women’s leadership is resourced to build resilience and shape solutions. The gendered impact of the climate crisis is reflected in the design, implementation and evaluation of the strategies intended to address it.

People are at the center of our approach to climate action. We strive to elevate the voices of indigenous peoples, farmers, pastoralists, and fishing communities to be heard in national deliberations over policy change. And we work to ensure that national-level development processes and investments promote resilience and prioritize communities in harm’s way.

Oxfam is working with partners and climate change advocates to counteract the effects of climate change on communities facing marginalization and exclusion, and we are pushing for those most capable of addressing the climate crisis to move first and most ambitiously.

For over a decade, Oxfam has campaigned to raise awareness of the unequal effects of climate change and to urge global leaders to take action. We are proud to be an organization fighting climate change with allies to address the root causes and impacts of this crisis.

In our environmental and climate change work we:

Who takes the heat?

By clicking "Continue" below, you will be directed to a website operated by the Oxfam America Action Fund, an independent 501(c)(4) entity. 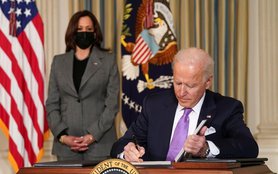 100 days later: Where is the Biden presidency heading?

As President Biden prepares for a speech on April 28, we step back to take stock of his administration thus far. We find a lot to celebrate, and a lot of room for progress.

Book recommendations for your little activist

Looking for resources for raising a socially conscious child? We've got you covered with this reading list compiled by Oxfam staff for kids of all ages.