Why are people in countries rich in natural resources suffering in poverty?

People in countries that are rich in oil, gas, gold, and copper are living in poverty. While corrupt governments earn revenue from these resources, people lack health care, jobs, decent education, and proper roads. Local communities have no say in the extraction of resources from their land and suffer from pollution, corruption, human rights violations, and the effects of climate change.

Oxfam helps communities affected by oil, gas, and mining operations to control how their natural resources are used – to defend their right to say if, and therefore how, projects are carried out. These projects should not add to poverty and powerlessness; they should help communities overcome these challenges as part of an environmentally and socially responsible form of development. 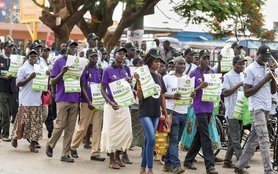 Governments must open up their budgets to public scrutiny when billions of dollars are flowing to end the crisis.

More than a pipe dream

In a world as rich as ours, it’s wrong that communities rich in natural resources face poverty, corruption, and human rights violations. When countries rely too heavily on non-renewable natural resources, they often don’t invest what they earn in agriculture—which can distribute income more widely across society. When community lands are seized for pipelines or mines, farming and fishing communities suffer. Indigenous people and women are particularly vulnerable—governments and companies often overlook their concerns. And once committed to exploiting nonrenewable resources, governments do not always distribute revenues back to communities.

Where is all the money going?

Between 2010 and 2014, oil produced in developing countries is conservatively estimated to be worth $1.55 trillion for their governments.

In many countries, oil revenues flow to governments with little or no transparency so it’s impossible to know if this money is being used for roads, schools, or hospitals … or if it is being siphoned off into corruption.

Oxfam is part of a world-wide movement calling for greater transparency in oil, gas, and mining revenues so people can use these revenues to fight poverty. Congress is considering repealing a vital piece of legislation called Section 1504 that requires oil, gas, and mining companies to disclose payments they make to the US and foreign governments. Passing this law established the United States as a leader in promoting transparency and fighting corruption. Today, this vital anti-corruption law is facing the chopping block. Join us in our campaign help people get the information they need to hold their government accountable for responsible use of their wealth.

More ways to get involved

Events in your area

Join like-minded people in your community and campaign for change.

The Politics of Poverty