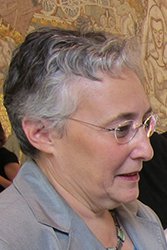 Nancy Salazar is a home health aide in New York City. For the past 13 years, she has worked 12-hour days caring for a man with disabilities. "This is a caring job," she says. "You want people to trust you, to like you." She says she's okay with the hard work and the hours, but she's not okay with the pay. Home health aides in New York City earn $23,500 a year, less than half the average salary in the city and almost $10,000 less than a family of four needs to pay for their basic daily needs, according to a New York City study.

You won't hear about her in Washington debates about the federal budget or the minimum wage. You won't see her up on Capitol Hill. But what happens in Washington determines whether she and two million other domestic workers can pay their bills and raise their families. The same decisions also determine whether frail and elderly people get the help they need, and children get the quality child care that puts them on the road to a productive future.

Caregiving is skilled work. Any parent needing child care, or person with disabilities employing a caregiver, will tell you that. Workers caring for young children or elders are performing some of our nation's most highly responsible and important jobs. But their pay is low and their benefits almost nonexistent, leaving too many domestic workers and their families in poverty.

Caregivers are mostly women, and many are supporting children. Wages are so low that 40 percent of home caregivers make use of Medicaid and/or food stamps. Home care workers hired through agencies have average starting salaries as low as $9 an hour. Median pay for home health and personal care aides was $20,170 a year in 2010. Home care workers do not even have minimum wage or overtime protections. Child care workers also have low pay and benefits, whether they work for a center or provide care in the home. Their median pay was $19,130 a year in 2010, or $9.28 an hour.

Better compensation for caregivers addresses serious national problems. First, if caregivers' work paid enough to keep them out of poverty, families and communities would see multiple benefits. Their children would eat more nutritious food and be less likely to live in unhealthy or unsafe environments. Their more robust health and development would lead to more success at school. Businesses would benefit as families could afford to buy more necessities and communities would improve when caregivers could pay for safer, better maintained apartments.

Second, the quality of care for our young, frail and elderly people would improve. Child care and home care workers would have more incentive to stay on the job. More experience and less turnover would result in better quality and more reliable care.

The demand for caregivers in our country is growing. The number of people older than 65 increased by more than 15 percent from 2000 to 2010, to more than 40 million people. As a result, home care occupations are the fastest-growing job in America, expected to increase by 70 percent from 2010 to 2020, from 1.9 million to 3.2 million. Tomorrow's seniors will have fewer children living farther away than in previous decades. They will live longer. Living at home will remain possible far longer if they can count on caregivers with experience and training suited to their needs.

The demand for child care workers is also growing, as working parents depend on experienced caregivers to help their children to learn and thrive. There were nearly 1.3 million child care workers in 2010, and by 2020 their numbers are expected to grow by 262,000, according to the Department of Labor.

It has been a long time since multi-generational families lived together with adults available to provide care to all family members who needed it. But while the need for paid caregivers is inescapably evident, we have failed to recognize that these jobs should be an important way to strengthen our imperiled middle class.

Clearly, most families and individuals cannot afford just compensation for caregivers on their own. It is time to commit to increased public funding and stronger labor protections for the caregiving role. Just as we recognized early in our nation's history that educating our children is a shared responsibility, we must now recognize that caregiving at all stages of the life cycle is a public value worthy of government support.

The Obama administration is close to taking an important first step: issuing regulations that would give home care workers minimum wage and overtime protections. But more is needed; more child care subsidies so that parents can get the help they need to pay for quality child care with well-paid and well-trained care providers, and enough funding to require that home health aides hired with federal dollars get adequate pay and benefits.

Increased public support would make it possible to establish career ladders, with entry level positions at lower pay, but with funded training to qualify for positions requiring more skills and responsibility. Just compensation of course must include paid vacation and sick leave. The Affordable Care Act should make it possible for most caregivers to have health insurance.

At a time when many in Congress want to slash federal services and oversight in nearly every arena, it may seem crazy to propose a broadened government role and increased funding. But the same arguments against regulation have been made against every expansion of worker rights and compensation that we now take for granted, from the 40-hour week to the minimum wage. Increased public funding for caregiving for the elderly and disabled would often actually save money, as it would help keep people living at home and out of far more expensive nursing homes. And the investment in early care has been shown many times to pay an excellent return on investment as children do better in school, stay out of trouble and earn more as adults.

One out of every three Americans, more than100 million people, live in or near poverty. If we want to reduce poverty in America, raising the pay of these workers is an important step. A national commitment to turn caregivers' jobs into middle class occupations would keep workers and their families out of poverty, make it possible for parents to work without sacrificing their own standard of living or their children's well-being, and boost financial security for millions of elders and the families now struggling to care for them.

Deborah Weinstein is the executive director of the Coalition for Human Needs, an alliance of national organizations working together to promote public policies that address the needs of low-income people and other vulnerable populations.