Saving for Change in Cambodia helps young entrepreneurs save, and build a better life

It might seem like an unlikely place to open a business. First, there’s the name: Kouk Sangkerch, which means “Lice Hill,” in Khmer. The second challenge: It’s in an active land mine clearing operation. Men in protective gear are searching, carefully digging, and finding, mines left over from conflicts in the last century. One of them says the previous week they uncovered two metric tons (more than four thousand pounds) of unexploded ordinance, as it’s called. And in the previous month, a vehicle was destroyed in an explosion.

But people live here, including Plen Soben, with her husband and two-year-old daughter. She’s opened a store selling groceries, and noodle soup, hot and ready to eat at a table at the side of the road. It’s just a few yards from the skull and crossbones signs warning people about the mines in the area.

The 25-year-old businesswoman bold enough to start a business here says she is a member of a Saving for Change group that offered special business training for young entrepreneurs. In it she learned how to attract customers, of which there are many in Kouk Sangkerch, and how to price goods so she can move a lot of her inventory and make some money, even if the profit margins are narrow.

And she learned the importance of saving. “I always just spent money,” she says, standing in front of her store. “Now, it’s in the box,” referring to the locked cash box each Saving for Change group uses to hold its deposits.

Oxfam’s partner, the Youth Council of Cambodia (YCC), is helping young people organize Saving for Change groups, and providing training for aspiring entrepreneurs to help them learn to start and run successful businesses. The SFC group members can be as young as 12, who are saving for school and for future business ventures when they graduate. It’s a way to help young people save money each week, sometimes just 50 cents, or as much as a few dollars, says Rom Teut, who works at YCC.

He says many young people drop out of high school and struggle to build a future. “We can help young people create jobs, small businesses, and build a future, instead of just selling their labor.” Teut says YCC has helped start 50 groups, and hopes to have 25 new ones forming this year. Each group has about 15 members. The project is being funded by the Red Nose Day Fund at Comic Relief Inc. 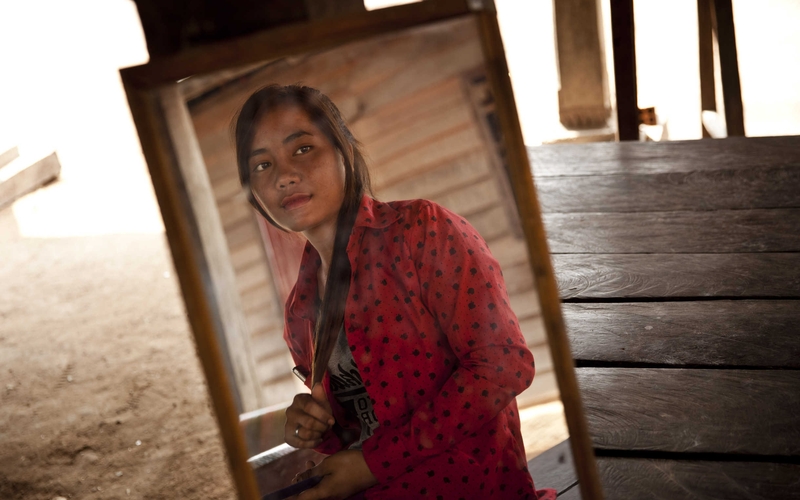 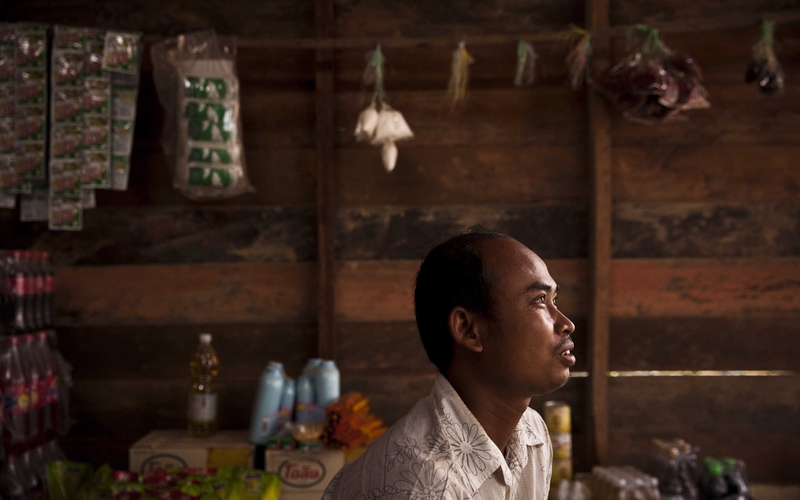 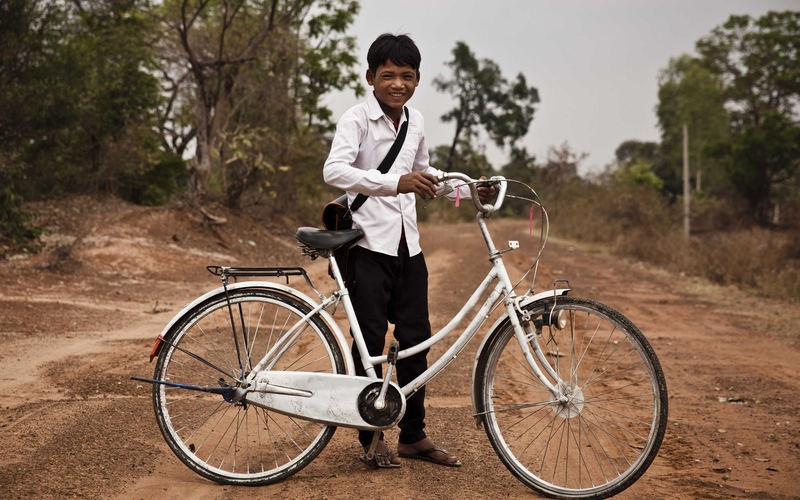 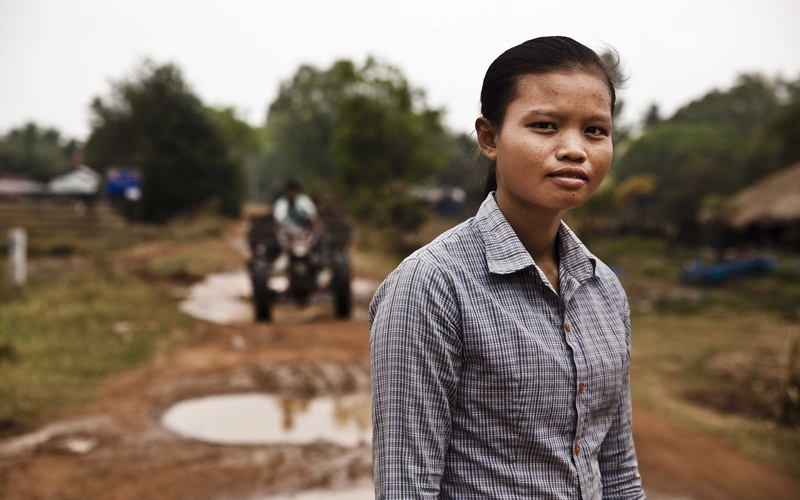 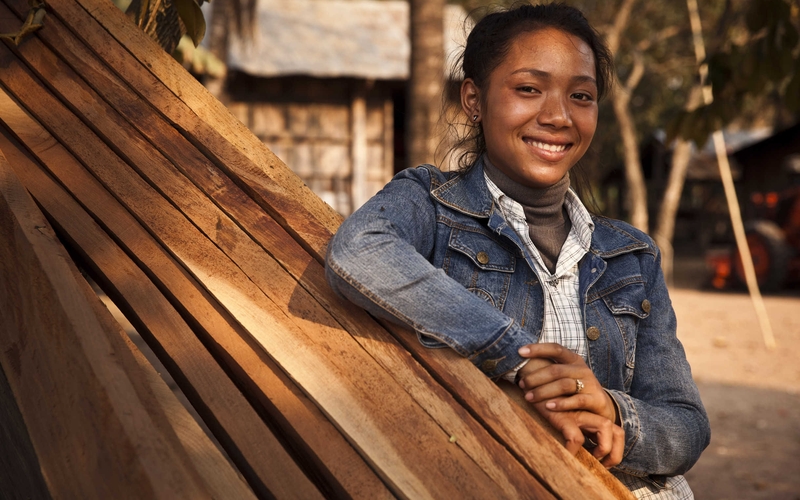 Salout Louy, 19, and engaged to be married, was a member of a Saving for Change when several young people asked her to help them form a new group. She later participated in a business training program funded by Oxfam, and now wants to open her own store selling cosmetics. “In this village there’s no cosmetics shop, so there’s a good opportunity,” she says. “I don’t have enough money to do it yet,” she says but predicts that “In five years I will have that business running.”

Vorn Piseth, 32, says “I did not have a cent in my pocket” when he joined a Saving for Change group, and took a business training class. With a business plan, profits from rice farming, and a loan from his Saving for Change group, he bought some wood and built a store on his mother-in-law’s land where he and his wife Hien Youb, 30, sell beer and other drinks, gasoline for clients on motorbikes, and all manner of groceries. He says he intends to invest his profits into expanding the store.

Mab Oeuy, 15, has been a member of a Saving for Change group for two years. He saved up some money, and borrowed enough from his group to buy a bicycle he rides to school. He makes money working in rice fields, and tapping trees in the forest for resin.

San Aemm, 21, aspires to become a teacher, and is saving money in her Saving for Change group in Oddar Meanchey province to pay for university. She says the money she and other group members are saving “will help reduce the amount of money our parents need to give us when we are studying.”

Da Sophea, 18, is a member of a Saving for Change group, and operates a road-side food stand in front of her parent’s house. She says that joining a Saving for Change group “taught me how to manage money, and I did the entrepreneurship training… that’s when things started to change.” She’s about to build a proper store with the lumber in this photo, acquired with a loan from her group. “I want to have a career, not just depend on my parents,” she says. “So I need to be independent and build my own business.”

Plen Soben joined a group and saved some money, combined it with a loan, and started her store. She decided to start another Saving for Change group in her community just for young people, so now she is a member of two groups and saves about five dollars a week at each one. She says that money management skills, access to capital at only three percent interest, and a safe place to save money are all practical reasons for young people to join a group. “When youth meet, they make friends and build solidarity,” she says, noting some of the other benefits for group membership. “They learn from each other, and are less likely to become gangsters or drug addicts, or just spend all their money without saving anything.”

Learn more about the history of Saving for Change since Oxfam started the program in 2005.

Book recommendations for your little activist

Looking for resources for raising a socially conscious child? We've got you covered with this reading list compiled by Oxfam staff for kids of all ages.

The decision means Syrians in the US like Nada and Monzer can go to sleep tonight without fear of deportation.