These artists use their cameras and paintbrushes to depict the toll war has taken on the Yemeni people, and make the case for peace.

For three years, the US has supported Saudi Arabia's military offensive in Yemen, which has resulted in at least 5,558 civilian deaths, injured thousands more, pushed 8.4 million people to the brink of starvation, and created the largest cholera crisis on record.

But these are just statistics. Numbers—and even words alone—cannot express how the war has uprooted the lives of Yemeni people, and especially women and children.

To illustrate the very human impact of these three years, Oxfam invited Yemeni artists from all over the country to submit pieces demonstrating how the war has affected women and girls.

Women are often the first to skip their meals to make sure their rations stretch further. Women, especially those who have been forced to leave their homes, are increasingly struggling to access hospital and medical services and legal services. Despite the obstacles, Yemeni women often serve as beacons of strength for their families, providing hope for the future.

The artwork in this gallery demonstrates that in times of war, despite a lack of stability and materials, the creative spirit continues to flourish. And overwhelmingly, the submissions Oxfam received not only portray why peace is necessary now, but point to women as harbingers of the way forward. 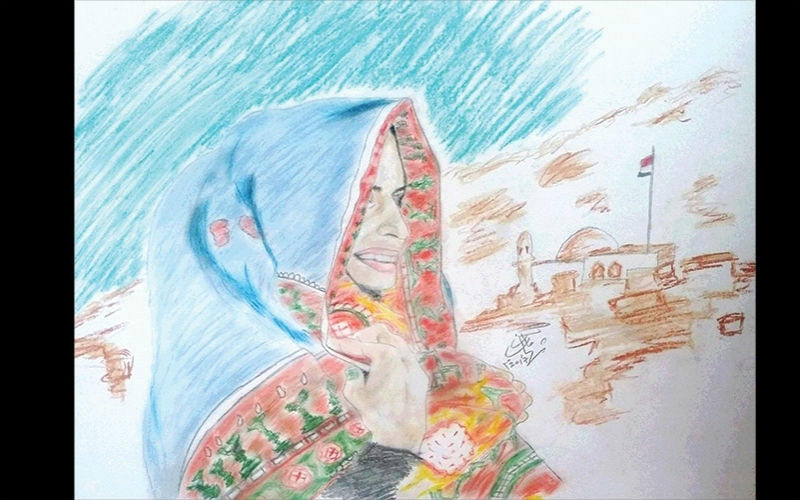 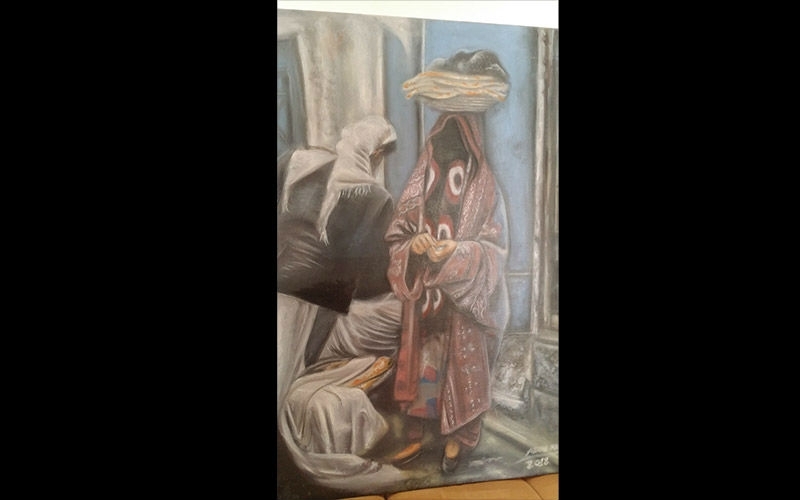 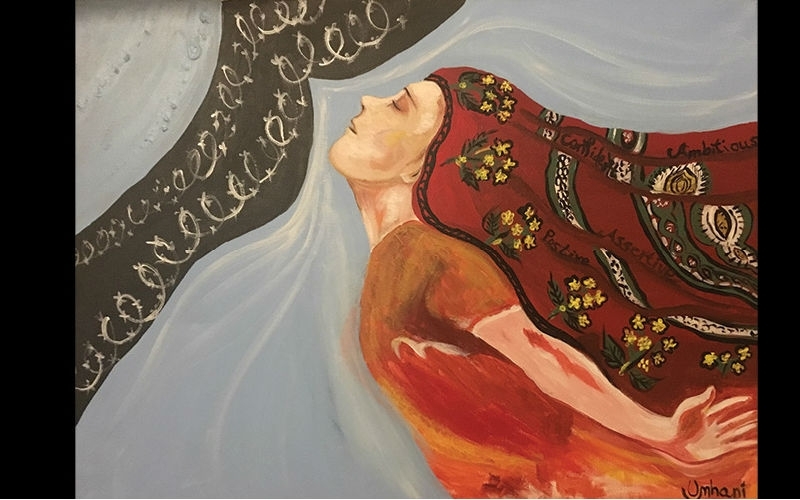 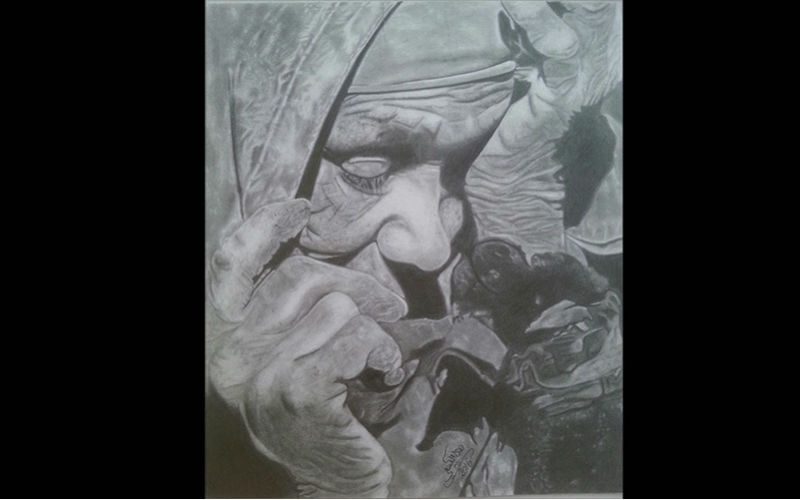 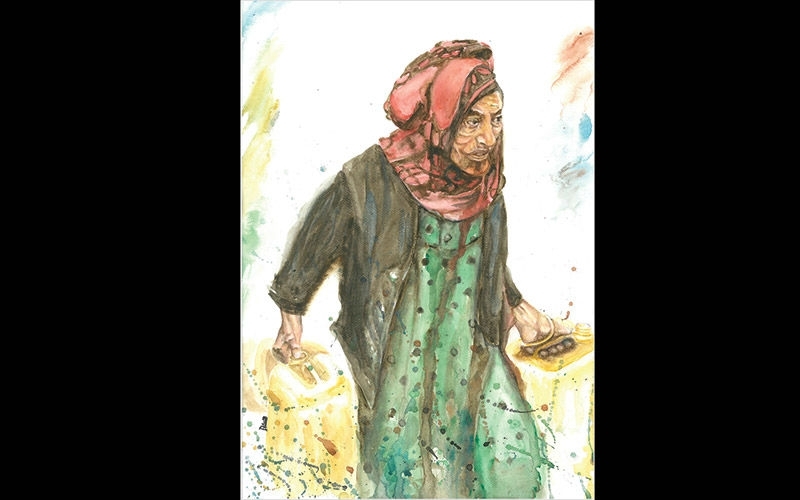 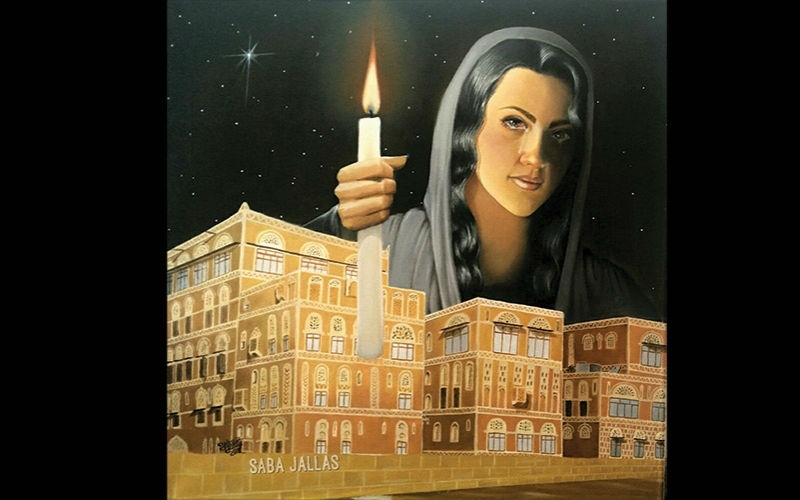 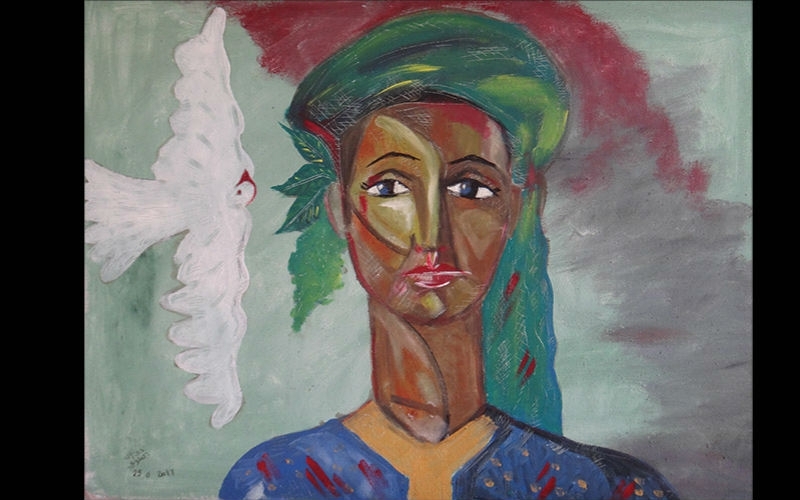 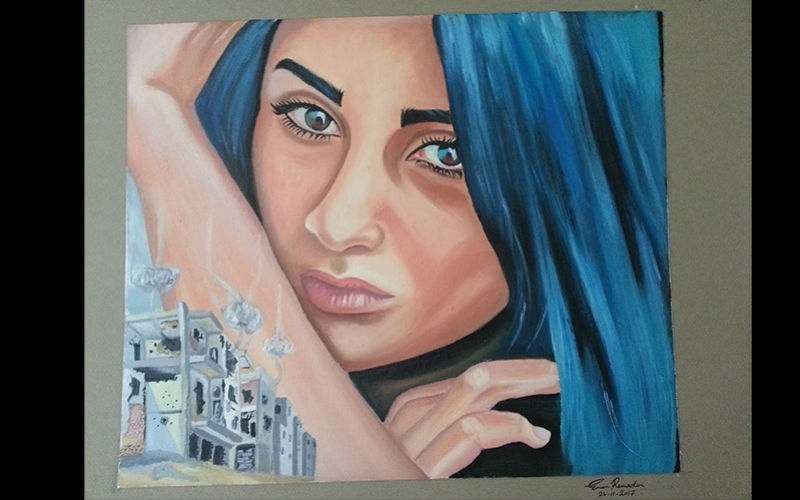 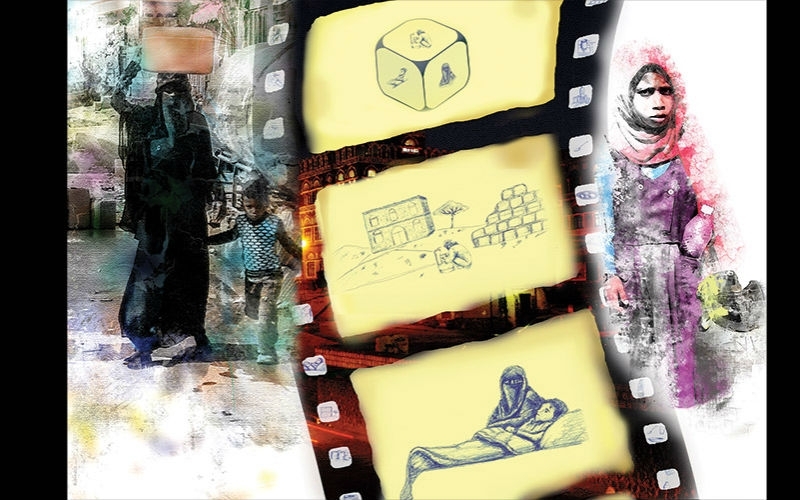 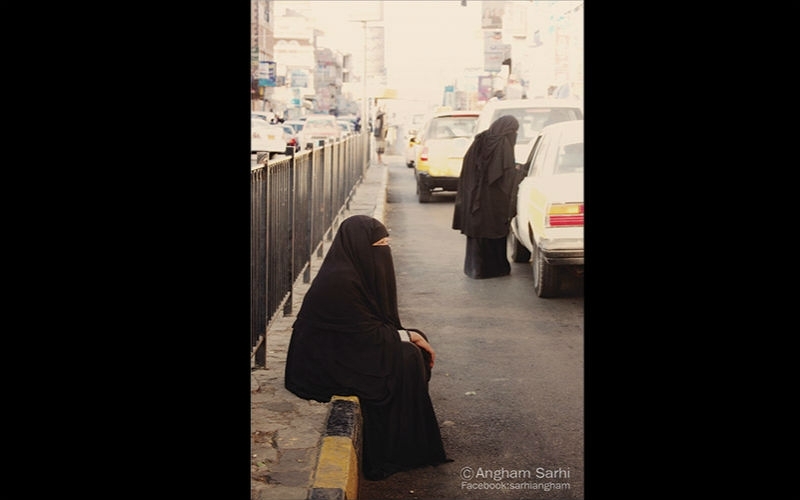 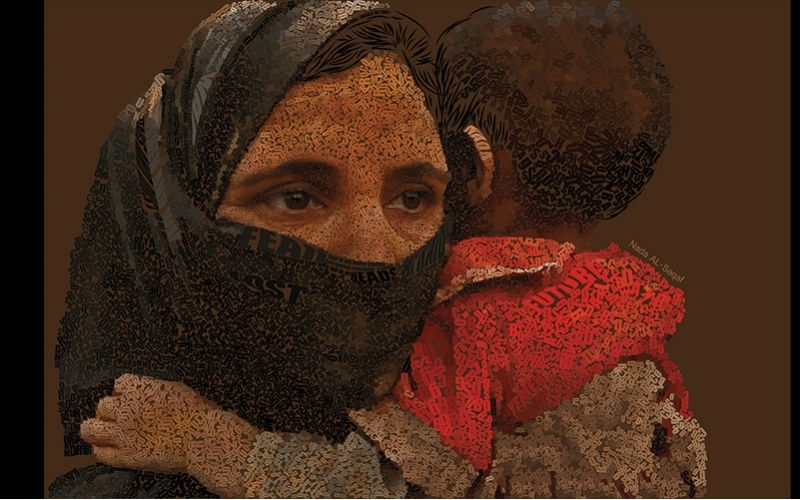 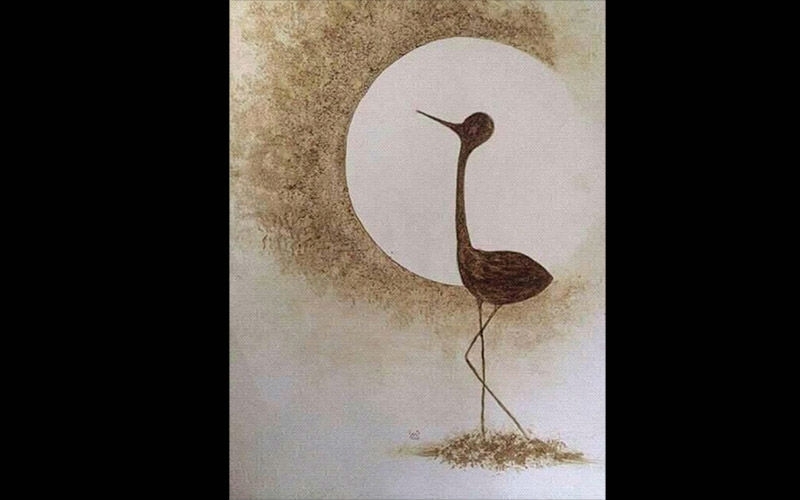 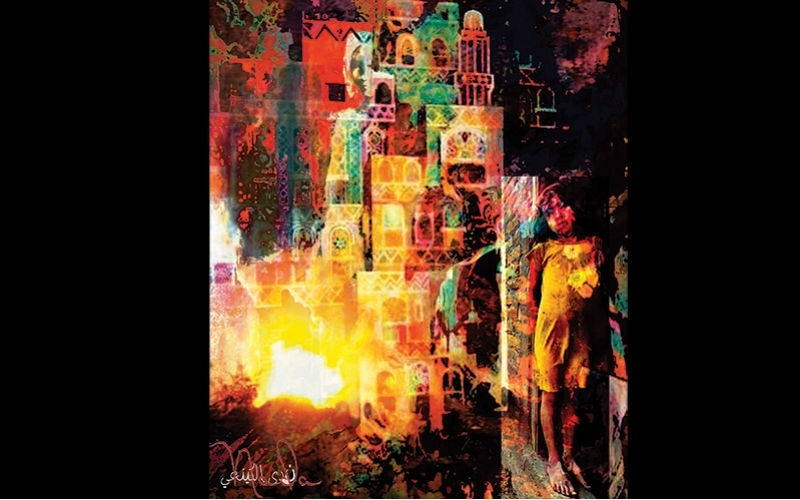 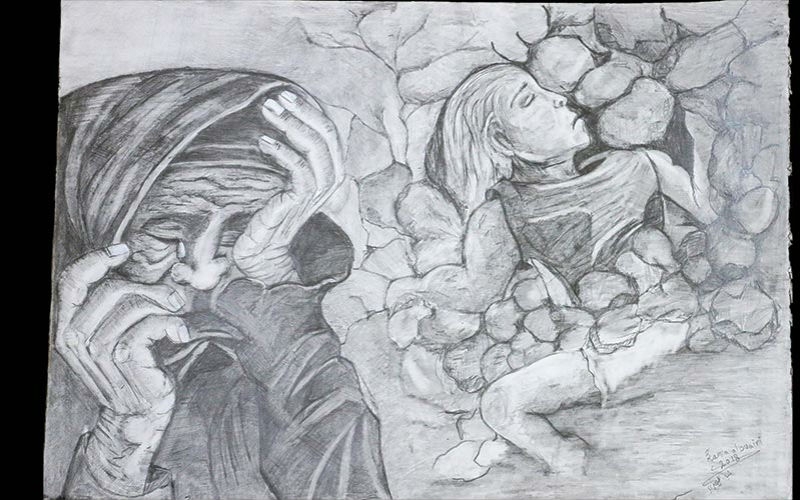 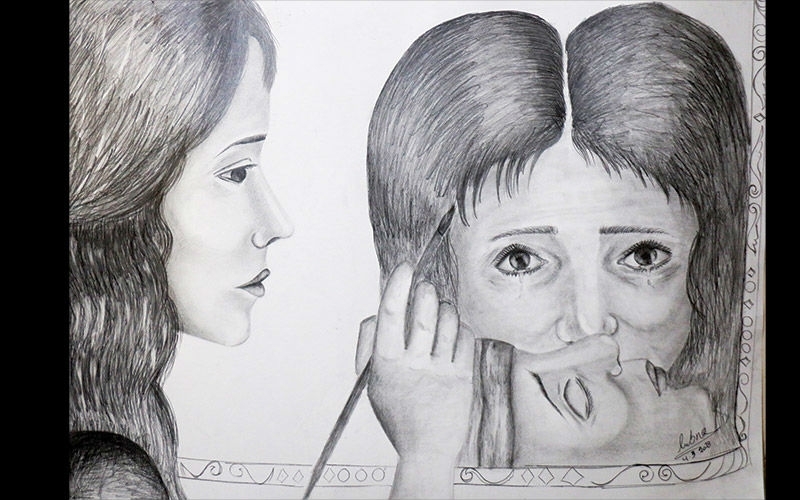 “A Yemeni Woman’s Look into the Horizon” is by engineer, activist, and conceptual artist Shihab Abdulbaset Ali Karman. The painting shows a Yemeni woman in traditional garb, the Sana’ani sitara dress. “This work reflects women's resilience during three years of war,” says Karman.

“Yemen, My Mother” is an oil painting by Marwan Abdulrahman Shuja’a. Shuja’a is losing his hearing, so painting is his main method of communication. He explains his painting: “War has changed a lot of roles and women have become the main agent in most families. In spite of suffering, the Yemeni woman still plays her role in society and struggles to make a living for her and her family.”

“A Woman, Challenge, and Resilience” is by artist and English teacher Umhani Abdulla Mohammed Al-Wareeth. “The artwork reflects how Yemeni women have grown stronger and more resilient despite the difficult situation the country is going through, and how she can overcome with patience and strength,” says Al-Wareeth.

“Bitterness of Living” is by conceptual artist Nada Mohammed Ahmed Al-Kaynaee. This piece highlights women’s suffering as a result of the war. “Their dreams and hopes have been shattered and their wildest dream has become to live in peace,” says Al-Kaynaee.

“Your War Will Only Make Us Stronger” is by Rowayda Abdulrahman Hussien Ahmed. Ahmed is a refugee living in Jordan and an artist who uses pencil on a watercolor canvas. The painting communicates how war makes people stronger as the old woman is strong enough to carry heavy cans of water, which Ahmed says represent life.

“When Sana’a Shed Tears” is an oil painting by Saba’a Mohammed Ali Jallas. “I use women in my works as symbols of love, peace, and giving,” says Jallas.

“Signs of Peace” is an acrylic painting by Thu Yazan Qayed Al-Alawi. The artist intends to change the image of women after war to show they are hard workers and able to participate in the peace-building and development process.

“Melancholy and Homeland” is a painting by Eyman Mohammed Ramadhan Yaqoub that looks at the mother as a representation of hope and safety. “The sadness shown by the woman at work reflects the consequences of this war,” says Yaquoub.

“Dice” is by Khalid Hassan Yahya Al-Oqbi. “The purpose of the painting is to highlight the direct confrontation between Yemeni women and girls and the consequences of conflict and war as well as women’s relentless struggle to provide life necessities such as food, water, health, and education for their families,” says Al-Oqbi.

“A Warrior’s Rest” by Angham Mohammed Hamood Al-Sarhi features two women who are displaced from their homes and work two jobs: cleaners in the morning and street vendors, selling their handmade goods. They long to return home to Hodeidah. “Despite the harsh living situation and the difficulty of work in the blazing sun, when I chatted with [these women], I felt optimistic when they repeated that the war will end and their life will be better, God willing,” says Al-Sarhi.

“Pain & Hope” is a typography portrait designed by Nada Jalal Al-Saqaf. Al-Saqaf is a lecturer at the Lebanese University, a trainer at GIPS Institute, and a partner at Trigon Design for printing and designing. “The painting embodies the resilience of women during the war, as we know that the burden of war and its aftermath falls on women,” says Al-Saqaf. “I wanted to highlight the vulnerable side of the strong women in which they emerge from under the rubble covered with dust carrying a little girl with the word future on her. It represents hope and the ability of women to stand.”

“Untitled” by henna artist Noura Abdulaleem Al-Absi was rendered using coffee. “I couldn’t afford to buy materials, so I thought up a new idea of drawing by coffee,” says Al-Absi. She says the message behind her work is to prove that despite difficult circumstances, it’s always possible to create, even with the simplest means. “Whenever we are down, art shall set us free and empower us to appreciate our self-worth and being,” she says.

“Unitled” is a Photoshop-created design by conceptual artist Nada Abdulkareem Mohammed Al-Kaynaee. “The purpose of the work is to show the extent of devastation that war has caused on humans,” says Al-Kaynaee. “It shows the impact on man, especially women and children, and this is illustrated by the image of the woman in the back and the child in front.”

“Women in The Times of War” is a painting by artist Lamya’a Al-Buhairi. The painting symbolizes the suffering of Arab women during war.

Since July 2015, Oxfam has reached more than 1.5 million people in nine governorates of Yemen with water and sanitation services, cash assistance and food vouchers.

For women who survive acts of violence, finding refuge shouldn't be this difficult

Despite surviving multiple traumas in their home countries, enduring criminalization in Mexico, and being denied asylum by the United States, these women stuck at the US-Mexico border teach us what it means to joyfully resist. It’s time fix the US asylum process to provide lifesaving refuge to people fleeing persecution because of their gender.

What’s the difference between Sudan and South Sudan?

Are you confused about what’s going on in South Sudan? How about Darfur, Sudan? Do you know the difference between the two countries?

Give moms what they really need: an economic recovery plan that works for mothers

This Mother's Day, moms need more than a token of gratitude. We share this open letter to thank moms for all the work they've taken on since the pandemic began and call for the support they deserve.