The agreement, announced Monday, caps a two-year drive by the Coalition of Immokalee Workers to convince the giant restaurant chain to take a step toward improving the wages and working conditions for farm laborers. The coalition is one of Oxfam America's key partners in its campaign to tackle rural poverty and injustice in the farm fields.

"This represents economic relief for farm workers and gives them real participation and a voice," said the coalition's Lucas Benitez.

"The significant thing is that McDonald's is the largest restaurant chain in the world and the second largest employer of workers in the United States," added Guadalupe Gamboa, a program officer in Oxfam's US regional office. "And so, for a little group like CIW to take them on and beat them is pretty significant. It shows the power of consumer pressure."

Starting in the 2007 growing season, McDonald's will pay an extra penny per pound for Florida tomatoes offered through its produce suppliers to its US restaurants. The farm workers will receive the increase directly for the tomatoes McDonald's buys. The agreement also lays out a plan for CIW and McDonald's to develop a new code of conduct for Florida tomato growers and calls for the creation of a third-party mechanism to monitor conditions in the fields and investigate workers complaints about abuses.

Typically, Florida field workers earn between 40 and 45 cents for each 32-pound bucket of tomatoes they pick—a wage that has not gone up significantly since 1978, according to CIW. At that rate, working a 12-hour day, laborers would have to pick nearly two and a half tons of tomatoes to earn the federal minimum wage of $5.15 an hour. With the penny-per-pound increase, workers can earn 32 cents a bucket more.

An Oxfam America report released in 2004, Like Machines in the Fields: Workers Without Rights in American Agriculture, documented the harsh conditions farmworkers endure and how big buyers, like institutional food services and fast food companies, are buying increasing volumes of produce at increasingly cheaper prices.

"Like machines, nearly two million workers in America's fields labor without rights, earn sub-living wages, and exist in dehumanizing conditions," said the report. "Already, farmworkers are among the poorest—if not the poorest—laborers in the United States."

Added Gamboa, "In the past 20 to 30 years, farm workers' wages have been stagnant. It may not sound like much, but for poor farmworkers in southwest Florida, McDonald's decision to increase by a penny a pound the amount it pays for tomatoes could translate into nearly a doubling of wages.

They have lost value in real dollars. But the profits earned by the retail industry have gone up tremendously, and it has been profiting from the sweat and labor of the workers."

And that has translated into profound hardship for field workers, whose average annual salary in 2005 was between $10,000 and $12,499, according to the National Agricultural Workers Survey. The federal government considers an individual earning less than $10,210 to be living in poverty. The income guideline for a family of four is $20,650 a year—more than the average farm worker household earns. That figure ranges from $15,000 to $17,499, according to the agricultural survey.

Since 1993, when CIW first began organizing with a small group of workers in a borrowed room at a church, the coalition has worked hard to address the injustices farm laborers face. The message is now getting heard—at the highest levels of corporate America.

"CIW has publicized the terrible conditions of farm workers," said Gamboa. "People who pick the food don't have enough to eat. They endure terrible living conditions with between 10 and 15 people in a single trailer. And in real terms, their wages have gone down in the last 20 years."

That was the reality CIW set out to change when, in 2001, it launched a national boycott of Taco Bell, another fast-food giant that purchases great volumes of tomatoes. The company had long denied responsibility for the bad working conditions and below-poverty-level wages at the farms that supplied it tomatoes. Students, religious groups, and labor organizations all got behind the boycott, galvanizing support for CIW's cause and putting intense national pressure on the company.

"We are laying the groundwork for real change," Benitez said at the time, "both in the concrete conditions of farmworkers' everyday lives and in the market itself."

On Monday, with the McDonald's agreement in hand, those farmworkers have marked a another victory in their long, slow struggle toward equity and justice.

"Today, with McDonald's, we have taken another major step toward a world where workers can enjoy a fair wage and humane working conditions in exchange for the hard and essential work we do every day," said Benitez. "We are not there yet, but we are getting there, and today's agreement should send a strong message to the rest of the restaurant and supermarket industry that it is now time to stand behind the food they sell from the field to the table." 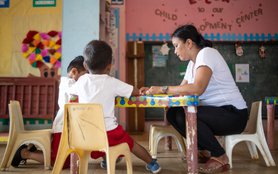 Oxfam’s new report, Time To Care, warns that today’s levels of extreme wealth concentration are not sustainable, and that so many billionaires are a sign of economic sickness, not health.