Felicia Ayaawin just wanted a little water for her husband and her four children. But when she went to a well a few hundred meters from her home, she found that some kids had dumped their dirty laundry in the well to soak.

“It was so sad,” she says, sitting outside her home, six-month-old son Matthew on her lap. ”But we had no other options­—it was the only well.”

She’s got a better option now. When I met Ayaawin, she was filling a bucket with water from a new well, just steps from her home in Kpatua, a village of about 110 families in the farthest northeastern corner of Ghana. She drew the clean water from a tap connected to a 450-liter tank filled every day by an electric pump powered by 10 solar panels that can generate 1,800 watts. Ayaawin just turned the tap, filled her bucket, strapped Matthew to her back, hoisted the bucket onto her head, and was home in a flash.

The well was installed by Presbyterian Agricultural Station in collaboration with Northlite Solar Company and Oxfam. Oxfam provided a grant to test the suitability of the equipment for the well, and to test the panels, lights, and batteries the project also installed at the primary school, health clinic, and 10 households in Kpatua. In addition, Presby Agric, as it is known locally, distributed individual solar lamps to 100 homes.

While the project is still in its infancy, there are already signs of community progress. Gocker Kwesi Musah, the head teacher at the primary school, says solar energy has brought major improvements to the school, noting “a vast change in [student] performance” since it was introduced in early 2016. Faculty can now teach students how to use computers, and they can demonstrate in science classes how electricity works, says Musah.

For the first time last spring, all 28 of his graduating sixth-graders passed the end-of-year standardized tests and qualified to go to the best junior high school in the area. In previous years, the passage rate was about 45 percent.

Two large batteries help the school store power to illuminate classrooms in the evening, so students with no lights at home can study after sundown. On a recent Thursday night, about 12 students were there working away.

“Learning goes on at night,” Musah says, noting that, “even students from other schools come here.”

Latana Ganda, the 26-year-old nurse at the village health post, says she used to travel about 7.5 miles to Garu, a nearby town with electricity, to get vaccines and ice packs, and bring back any unused vaccines at the end of the day. “Now with the solar fridge,” she says, “we don’t have to go every day, and we use a lot less fuel.” It’s easier to vaccinate children, keeping them healthier. Solar-powered batteries at the clinic help her better respond to emergencies at night, and they run the refrigerator.

The chief of Kpatua is Mbil Ayaada. His is one of the 10 homesteads with a solar light system. It includes three LED lights, which are highly energy efficient, and a light with a motion detector installed near the entrance to his compound, where he keeps livestock at night. It’s all powered by 10 panels and a battery.

He says he doesn’t miss buying kerosene for lamps and batteries for flashlights, expenses that can add up in a large household of about 35 extended family members, including about 25 school-age children. When all the kids get together to study in the compound at night, it looks like an entire school.

“It’s been a great help to the community,” Ayaada says. “You can see the children in the evening, all learning. I like that.”

In the next phase of testing, Solomon Atigah of Presby Agric says the plan is to pump water from the solar well out to fields so villagers can grow vegetables in the dry season, a time when many people migrate to other parts of the country to look for work. This irrigation initiative went beyond the original concept, but “Oxfam helped us expand the idea of this pilot project from just a few households to addressing the health, education, and agriculture challenges in the community,” says Atigah.

But some locals are not waiting to test the idea; they’re already sold on it. Felicia Ayaawin and her husband grew a few tomato plants over the summer with water from the nearby well. She had three beautiful tomatoes in a bowl at her home. She sees the potential for her family, and her village, to grow more with water pumped with electricity from the sun.

Your contributions help Oxfam and our partners identify appropriate, affordable innovations that can fight poverty. 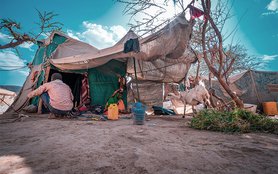 What's the best way to resolve the humanitarian disaster in Yemen? End the war.

Oxfam is responding to urgent needs and mobilizing supporters to stop US support for the war.

Puerto Rico scrambles to respond to a new emergency

A new crisis demonstrates how little the island has advanced in its struggle to rebuild since the devastating hurricanes of 2017.