When tech entrepreneur Elon Musk challenged the United Nations last year to show him a $6 billion plan that would end world hunger, he got in return a proposal that would save 42 million people in 43 countries from starvation.

Since Musk’s challenge, the hunger crisis has worsened—increasing the number of people in need, and driving up costs. Extreme hunger has more than doubled in the world’s worst climate hotspots, and about 1 in 10 people worldwide suffer from chronic hunger—meaning they do not consume enough food to maintain a normal, active lifestyle.

At Oxfam, we’ve been focused on food and hunger since our founding. So we’re going to explain what money could accomplish, step by step: How close are we to Zero Hunger; how much money could help achieve it; and what money can’t solve, including what else we must do if we are serious about ending world hunger.

How close are we to ending world hunger?

Seven years after world leaders committed to end hunger by 2030, the crisis is heading in the wrong direction. The UN reports that 150 million more people are affected by hunger since the start of the global pandemic. That means as many as 828 million people experienced hunger in 2021—more than three times the size of the US population.

There are two main dimensions of the crisis:

"It is abysmal that with all the technology in agriculture and harvesting techniques today we are still talking about famine in the 21st century,” said Mohanna Ahmed Ali Eljabaly from the Yemen Family Care Association. “This is not about one country or one continent, and hunger never only has one cause. This is about the injustice of the whole of humanity.”

How much money could help end world hunger?

Current estimates suggest that as of this year, we need donor governments to invest around $37 billion every year until 2030 to tackle both extreme and chronic hunger.

Let’s start with extreme hunger. We need about $23 billion just this year to meet the needs of people facing starvation and acute malnutrition.

So how much more money would it take to address chronic hunger? According to Ceres2030, an initiative led by foundations, universities, and scientists working to find solutions to hunger, donor governments would need to invest an additional $14 billion on average in foreign aid every year until 2030 to end hunger sustainably.

Low- and middle-income countries also have a role to play. According to Ceres, these governments would need to raise revenue to spend on average around $19 billion every year until 2030 toward ending hunger.

To end world hunger, we need to recognize why people are hungry at a time when we have enough food globally to feed 10 billion people.

That’s why we need to transform our food systems if we’re serious about ending world hunger. That starts with supporting local food production and thriving local food systems while pushing giant corporations that dominate global food markets to do right by people and the planet.

Ending world hunger is the best investment money can buy. By making clear financial commitments to address extreme and chronic hunger, world leaders can bring us closer to Zero Hunger in the years and decades ahead. But money is only part of the equation—and we need to transform food systems to ensure food security for all.

Every time you sit down to a meal or go shopping for food, you have the chance to help build thriving local food systems—one critical piece to achieving Zero Hunger. That’s why Oxfam started the Eat for Good initiative to help people like you shop and eat more sustainably.

Download our special Eat for Good recipe e-book today to gain access to a one-of-a-kind collection of recipes from incredible chefs, artists, and activists that support Oxfam's mission to fight inequality to end poverty and injustice. Each aligns with a specific Eat for Good principle—save food, shop seasonal, eat less meat, support farmers and farm producers, and cook smart. 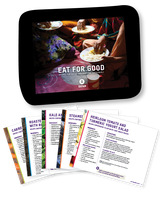 Do your part to build thriving local food systems

Our Eat for Good recipe e-book has 30+ recipes to help you and yours shop and eat sustainably.

Thank you for your interest in eating and shopping sustainably this holiday season. We're excited to keep you informed about ways you can partner with us to fight inequality to end poverty and injustice.