The pre-election debate in Senegal, as in most African countries, is often dominated by issues relating to the electoral process. Many voters wonder if the election will be fair, and if the votes will be properly counted. The real concerns of the citizens regarding poverty, hunger, and the economy are pushed off the agenda. To change this situation, Oxfam America and the Council of Non-Governmental Organizations (CONGAD) created a Citizen Monitoring Program that encourages the 15 candidates in the February 25 presidential elections to refocus the political debate on development and anti-poverty programs. The program features public hearings with the candidates or their campaign board members during the February 2007 political campaign.

"In the run-up to an election, discussions are primarily focused on election process issues—which is necessary as it guarantees transparency and therefore social peace," said Mamadou Bitèye, Oxfam America's Regional Director for West Africa. "However, candidates must go one step further by voicing their views on the concerns of the citizens, such as poverty and economic governance issues." Biteye said the hearings are designed to "provide an objective basis for voters to decide who to elect."

The purpose of the exercise, as stated by Amacodou Diouf, vice-chair of CONGAD, is to "ensure that sustainable human development needs are addressed in the programs developed by the political organizations that seek the vote of the Senegalese people."

Some of the issues that will be addressed during the hearings include poverty, governance, economic growth strategies, gender, education, health, and agriculture.

A monitoring mechanism called Civil Society Observer will be created to monitor the actions of the new President of the Republic, and encourage him to deliver on the promises made during the election campaign.

Contacts have already been established with all candidates or their campaign boards and some of them have agreed to take part in the hearings. Hearings will be public and attended by the media, members of civil society, experts in sectoral issues, and citizens.

About 10 print and TV journalists, as well as some members of civil society, attended a ceremony to announce the Citizen Monitoring Program. Mouhamadou Mansour Seck, retired general and former ambassador of Senegal to the United States, was also present at the meeting with the journalists.

According to Ibrahima Aïdara, Governance Advisor at Oxfam America West Africa Office, "the initiative will be replicated during the legislative elections with hearings in the regions to allow citizens to question the candidates for parliament about their real concerns." 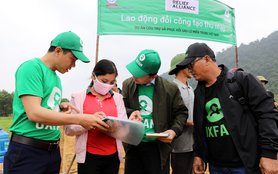