Vu Nanh Hung’s house is literally full of green tea. “I just harvested it this morning,” Hung says, inviting visitors to sit down and talk. It’s a rainy day so he piled the tea inside his house to keep it dry, leaving a path to his heavy frame bed. The air all around the fields and in his home is full of the aroma of tea.

Hung, 45, has grown rice his entire life in Trung Thanh village, about four hours north of Hanoi in Thai Nguyen province. But it is only in the last two years, since he started learning some different techniques for growing rice, that he has been able to produce enough to feed his wife and two children entirely from his own harvest--and sell a surplus. He says he now has more time for growing tea.

He and a group of farmers learned new rice growing techniques from experts with the agriculture Ministry’s Plant Protection Sub-Department in a program partly funded by Oxfam. It’s called the System of Rice Intensification: A set of low-cost techniques for growing rice that uses less seed, water, fertilizer, and pesticides. It saves time and money, and increases yields.

Hung recently finished harvesting the rice he grows on about half an acre. “I just sold 1 [metric] ton of rice and earned 6 million VND” [$285], he says. “I have never sold a ton of rice like this. My best crop ever was about 600kg.”

“Thanks to SRI the labor is a lot less,” Hung says. “So that means we have more time…I have an extra 7 to 10 days in each season to do other things to earn money.”

Hung says he is rebuilding his house. It used to be mud and thatch, but is now brick with a metal roof. The doors and windows have yet to arrive, but he has poured a new concrete slab and is adding a kitchen soon.

“You know when SRI was first introduced here, we were so poor…” Hung says. “It’s hard to describe our feelings in those days, we just weren’t as happy as now…and I can say we have more food.”

On the other side of town, Yen Thi Luong is making tofu out in her courtyard, under a metal roof to stay out of the rain. The 51-year-old grandmother has boiled soy beans and is now pouring the curd into a mold.

Luong says she grows almost 50 percent more rice on her half-acre field since she switched to SRI three years ago. “We use the same inputs and gain a higher yield. So we spend less time in the field working,” Luong says while her tofu cools. “With these SRI techniques I have more time to take care of myself, and I can spend more time tending livestock and making tofu.”

Luong’s tofu business brings in about $200 each month, a significant amount of money in Thai Nguyen province, where as much as 25 percent of the population lives in poverty (nearly twice the national poverty rate).

Just north of Trung Thanh is the Dinh Hoa district. As the rain pours down, a few members of the SRI farmer’s group in Na Tap village drink tea. Loc Thi Su, 36, a married mother of two, says that these days she is growing more than enough rice to feed her family, a welcome change from the struggles in her past. “We were always hungry and did not have money to send kids to school,” Su says. “We had a food shortage for one to two months each year. We worked from dawn to dusk. Now with the introduction of new [SRI] technology we use fewer inputs, less pesticides, and now we have more time to do other things to earn money.” 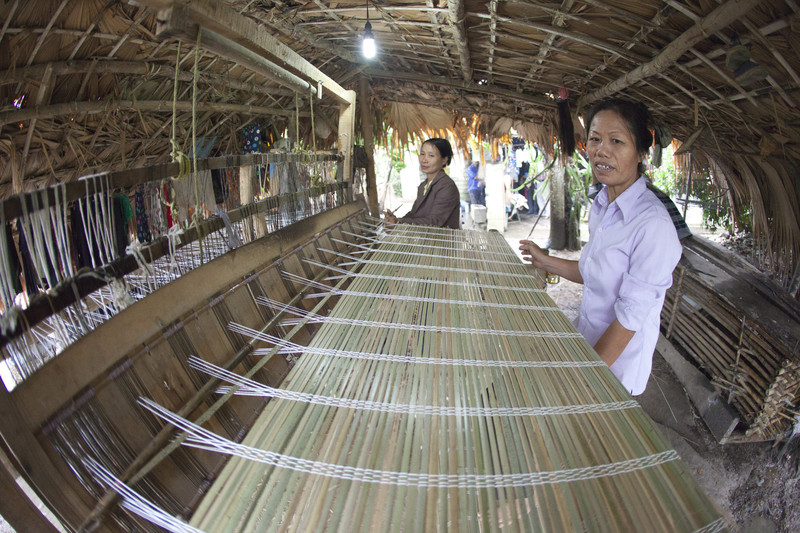 Loc Thi Su (left) and Doa Thi Bon make window blinds on a loom, one of the ways they earn extra money with the time they save growing rice using the System of Rice Intensification. Photo by Chau Doan/Oxfam America.

One of her side businesses is harvesting bamboo from nearby forests, cutting it into strips, and weaving them into window blinds on a loom. She works closely with her neighbor Doa Thi Bon, 47. They frequently will make blinds for an hour or two in the evening; Su reports she can make 50,000VND (about $2.50) a day this way. “But on rainy days I can spend all day making blinds,” she says, as she and Bon walk arm in arm under an umbrella to their loom.