Description of community and mine

The Yanacocha gold mine is currently operating on 26,000 hectares (about 63,700 acres), high above the city of Cajamarca in the Andes mountains of Peru. But that is just a small area: The government conceded a total of 282,000 hectares (690,000 acres, slightly , larger than the state of Rhode Island) to Minera Yanacocha, a company comprised of majority owners Newmont Mining of the United States and Minera Buenaventura of Peru. Yanacocha continues to be a significant part of Newmont Mining's global production, contributing about a quarter of the 5.3 million ounces of gold Newmont sold in 2007.

Minera Yanacocha is working aggressively to expand the mine. In 2004, the mine began exploring for gold on Cerro Quilish, a small mountain that comprises the top of the watershed supplying the city of Cajamarca and the rest of the valley. Dairy and potato farmers in the area and many others opposed to mining Quilish blocked the road to the mountain in 2004. There were weeks of violent confrontation between police and protesters. In the end, Minera Yanacocha stated publicly that it had underestimated the concerns of local people and asked the Ministry of Energy and Mines to revoke its permit to explore for minerals on Cerro Quilish.

The mountain remains in the mine's concession area. Many of the Quechua-speaking indigenous people in the area consider Quilish their apu, a mountain spirit, and a sacred place. "When the clouds gather above Quilish, we know it will rain," says Nelida Chilon, a 24-year old from Bajo Porcón, midway between the city and the mountain. "We want to protect Quilish, our source of water. The [mining] engineers tell us there is water, and no pollution, but we know the land does not produce as it used to, and there is less water than ever."

Local governments representing communities opposed to mining on Quilish also adopted laws to designate it a protected natural area. Other communities where the mine intends to expand have taken similar measures. Oxfam America's partner GRUFIDES is supporting efforts by local communities to protect their land, and provides training and other support to local people eager to learn about and defend their human rights and protect their water sources. With help from Oxfam America, GRUFIDES is also working with the regional government's environmental management agency to create a land use plan that would clearly designate areas for agriculture, human settlement, mining, and other activities.

Minera Yanacocha is disputing 12 local ordinances that prohibit mining, and plans to expand mining exploitation to these and other areas, including La Zanja, where one person was killed by police during a demonstration in 2004. The environmentally fragile high altitude wetlands of El Solitario, where there are 240 ponds and lakes, is another area of proposed expansion.

Minera Yanacocha is claiming jurisdiction in Lima where the company is officially located and where judges are not familiar with these local areas. Communities are hard pressed to be properly represented in the proceedings due to costs and distance (375 miles). "With that kind of trial you know who is going to win," says Marco Arana, one of the founders of GRUFIDES, Oxfam America's partner in Cajamarca. He added that when legal and institutional roads are closed to citizens, it leads to confrontation, and "adds to the social exclusion and asymmetry of power in Peru."

Oxfam America is supporting the work of GRUFIDES to help local communities defend their rights and create an appropriate land use plan for the region. Oxfam is calling on Minera Yanacocha to: 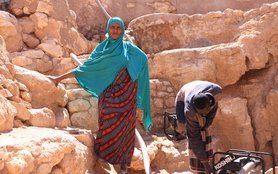