International relief and development organization Oxfam America applauded today the United Kingdom’s Parliament for passing an oil, gas and mining transparency law. The law provides a standard for the US to follow in finalizing its own rules requiring payment disclosure.

The legislation makes the EU Accounting Directives the law of the land in the UK, with the Transparency Directives to follow soon. The Directives require oil, gas, mining and logging companies to publicly disclose the payments they make to governments for the extraction of natural resources. The Directives were modeled on Section 1504 of the US Dodd-Frank Act, which require companies to disclose payments at the country and project level. Although Section 1504 became law more than four years ago, its implementation has been delayed multiple times by the Securities and Exchange Commission (SEC).

“We’re thrilled. This is an historic day for communities and corruption-fighters all over the world, who will soon see some of the largest oil and mining companies, like Shell, BP, Total and Anglo American publish how much they pay to governments in every single country where they operate,” said Ian Gary, senior policy manager for Oxfam America’s extractive industries program. “We applaud the UK government not only for their leadership in setting a global standard, but also for getting this done ahead of schedule. Since many covered companies are cross-listed in the US, these requirements now set the example that the SEC should follow in its own rules that we hope will be released next year.”

The Accounting Directives require large public companies incorporated in the EU to report their payments – which includes Shell, BP, Total, Anglo American and others. The Transparency Directives require companies listed on EU-regulated stock exchanges to report their payments, including Gazprom and Sinopec. When the UK passes the Transparency Directives soon, both UK-listed and UK-based companies and their subsidiaries will be required to publicly disclose payments at the project-level, as will their peers and state-owned companies. This includes a large number of the world’s 100 largest oil, gas and mining companies, as well as subsidiaries of major US companies incorporated in the UK, including ExxonMobil, ConocoPhillips, Chevron, Marathon and others. First reports to the public will be released in 2016 and will cover 2015 payments to governments.

Many companies will also be covered by the US regulations once they are finalized: together the EU and US transparency laws will cover 65 percent of extractive companies by value worldwide. Canada has introduced legislation, which it pledged to finalize by early next year, and Norway has adopted similar rules. Once all of these laws are finalized they would cover 84 of the world’s 100 largest oil and gas companies, and 58 of the 100 largest mining companies.

“Consistent, strong global transparency laws like the EU Directives will help ensure that revenues from resource extraction are properly managed and protected from corruption, benefiting citizens from both resource-rich and investor countries,” said Gary.

The EU Parliament passed the EU Accounting and Transparency Directives in 2013 and member states have until 2015 to transpose the Directives into national law. France, Germany, Italy, Sweden, Finland and Denmark have committed to adopt their own national laws quickly, and by the end of 2015 all 28 EU-member states will have implemented the Directives. Some companies, including Tullow Oil, Statoil and Newmont Mining, already voluntarily disclose this information.

Oxfam America is currently suing the SEC for unlawfully withholding a final rule implementing Section 1504. With similar legislation moving forward in Europe and Canada, and laws already in place in Norway, the SEC can justify a rule that is consistent with international standards. But the Commission has indicated it may not start the rulemaking process until October 2015 – and could further delay this non-binding timeline.

About 1.5 billion people in resource-rich countries live on less than $2 per day, and nearly $1 trillion is lost in developing countries each year due to corruption, including activities related to natural resource extraction. Oxfam America works to increase the transparency of natural resource revenues in order to reduce the corruption that leads to poverty and instead ensure that these revenues benefit local communities and reduce poverty and inequality. 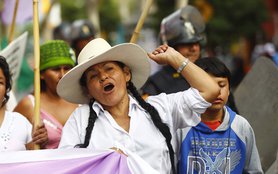