Chris Hufstader reports from El Salvador, where young people—particularly girls—struggle to live free from the violence driving so many to leave the country.

Whenever you get a group of students together, pretty much anywhere in the world, the tendency is to talk about the future. So that’s what we did with a group of middle- and high-school kids in a cinderblock classroom decorated with environmental science posters at the Hacienda La Labor school in the Ahuachapán province of El Salvador.

One 14-year-old said she wants to learn languages and work as an airline stewardess, and travel the world. A young man said he wants to be a ship captain, and another wants to become a business manager. One shy girl mustered her courage and announced, “I want to go to college.” But she actually has a more specific plan: “I always tell my mom I want to go to a military school and learn how to fly a plane.”

One thoughtful young man said, “I come from a poor family, but God willing I will become a professional, a lawyer, because I want to change the situation in the country.”

I decide not to ask this young man to spell out the “situation.” After all, it’s all over the news: Violence, poverty, and organized crime gangs are pushing families to spend their life savings to take the dangerous migration route north, enter the US illegally, and risk arrest, deportation, and lately the separation of their children by the US government.

The gangs in El Salvador originated in the US. They became active in El Salvador when undocumented young people were expelled from the US following criminal convictions. They are now flourishing, as youth struggle to stay in school and survive.

This is layered on top of a highly unequal society recovering from a violent civil war in the 1980s and, perhaps most destructive, a violent machista culture with little respect for females.

“Drug trafficking and gang culture have increased violence,” Melida Guevara told me. She’s a program manager for Oxfam in El Salvador and has been fighting for better respect for women’s (and girls’) rights in El Salvador for decades. “Gang violence exercises power over women by means of violence over their bodies. To resist is to die. So girls and young boys, some just 8 years old, are recruited to work for gangs or be girlfriends of gang members, and they are trying to survive in this complex and violent context.”

Guevara says Oxfam’s program at urban and rural schools across El Salvador is designed to help children understand they are individuals with rights and dreams, and that they have the right to pursue them.

This approach—empowerment and rights education—is a long-term process. But in the meantime, kids not migrating are suffering. So how are Oxfam and other organizations helping them cope?

Oxfam is working with partners to help schools in violent areas like Ahuachapán. A comprehensive initiative includes fixing up the bathrooms, ensuring the schools have clean water and the students wash their hands after using the toilet. Decent facilities are a major issue for girls, who are not inclined to attend school during their periods if the bathrooms are filthy.

The schools set up committees of students to promote good hygiene, and others to teach students to save money and promote financial literacy, which can later help young women to be more independent.

The students I meet with at Hacienda La Labor are part of a “co-existence” committee, which raises awareness of basic rights and teaches students how to resolve conflict and prevent violence.

This initiative emerged from Oxfam’s long-standing work on gender violence, as part of a campaign that raises awareness of violence against women in El Salvador. Oxfam also helped develop a comprehensive curriculum in collaboration with El Salvador’s Ministry of Education that uses arts and drama to teach young people about the destructive aspects of gender violence, and how to report violence when it occurs.

One 14-year-old boy at Hacienda La Labor said he sees the behavior of students at the school changing. “I had a classmate, he used to bother everyone, and I joined in it with him. We bullied people and made a lot of jokes.” Then their teacher suggested they join the co-existence committee. “Now we don’t bother others and concentrate on our studies,” he says.

Joel Mejia, director of a high school in nearby Getsemaní that has participated in the same project, sees a lot of positive things happening in his school. “I’ve seen substantial changes. The students wash their hands, the boys respect the girls, and there has been a substantial reduction in conflicts at the school.”

Mejia met me at the Shaira Ali Cultural Center in Getsemaní. Government workers, women’s health organizations, and most notably the Women’s Association of Santa Tecla, a longtime partner in Oxfam’s program, run the center with volunteers. When women suffer violence, they can get advice on where to find psychological help, how to file a formal complaint with the police, and meet with other women who can support them.

Volunteers from the Shaira Ali center visit schools in the area to teach young people about their rights, and are now integrating their work with co-existence committees formed as part of Oxfam’s project, where they “talk about violence prevention, feminism, and provide support for survivors of violence,” says Karla Gutierrez, a volunteer. They teach students about their sexual and reproductive rights, and refer them to doctors and nurses when necessary.

“We really struggle at the schools,” Gutierrez says. “The girls, some as young as 14, say their boyfriends force sex on them.” The gang system is everywhere, she says, and the girls are told, “‘if you do not have sex with me, you’ll be killed along with your family.’ So we try to support the girls, help them take care of themselves, so they don’t get pregnant or diseases.”

“Sometimes we are their only line of communication,” Katharine Perez adds. She is a university student training to become a social worker. “They call and text us asking for help. We don’t give them birth control, but share information about it.” She says they are trying to arrange for girls to come to the Shaira Ali center on specific days to meet with specialists for psychological support, family planning, and other help.

The struggle to help young people and particularly young women is an uphill battle, but in places where communities are organized and motivated to act, people can achieve small victories.

“We had zero pregnancies at the schools here last year,” Karla Gutierrez says, adding that the girls “now recognize when they are about to suffer harassment or violence, that when there’s touching involved, it’s a crime–especially when it’s a school director or teacher harassing them. They know that’s wrong.” 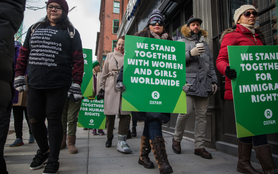