An unequal world makes ending poverty harder—and puts the chance at a good life out of reach for too many people.

Imagine lining up everyone on the planet by their wealth and status. On one end, a small group of individuals that have few, if any, barriers to living a full and healthy life. On the other, a larger group of people who find themselves excluded from the possibility to do the same.

Understanding global inequality starts with recognizing that not everyone enjoys the same rights, treatment, and opportunities. If you face generational poverty or gender discrimination, these barriers to equality can have profound implications for the kind of life you want to live.

So what is global inequality?

Global inequality is the unequal distribution of resources, opportunities, and power that shape well-being among the 8 billion individuals on our planet. Distinct from inequality within a country or between countries, global inequality is one way of understanding the different lived experiences of our fellow humans, no matter where they live.

Economic inequality often interacts with other kinds of disadvantage that result from power imbalances in society worldwide. For example, the absence of women’s voices in decision-making spaces or a caste system that discriminates against sectors of society with lower status reflect cultural, political, and social inequalities that undermine people’s well-being.

In other words: Global inequality stems not just from what people have and don’t have—but what they're able to do with what they have.

How is global inequality measured and does how you measure it matter?

Global inequality can be measured and understood in many ways. Some economic measures focus on the share of income that middle-income groups of people enjoy over time, while others look at the growing wealth among the richest in society.

This widening inequality is a major risk to human flourishing. Unequal treatment breeds distrust, and countries with high inequality grow more slowly—closing off opportunities for economic advancement. Measures that focus on extreme wealth and income also make it easier to see how structural policy choices widen gender and racial inequalities.

So what do we learn by taking a closer look at the growing gap between the rich and the poor?

“The test of our progress is not whether we add more to the abundance of those who have much; it is whether we provide enough for those who have too little,” said former US president Franklin Delano Roosevelt.

How can we reduce global inequality? What could it mean for ending poverty and injustice?

We all have a role to play in creating a more equal future, but governments and the private sector must be responsive to the perspectives and solutions of those most affected by poverty to reduce global inequality in two main areas.

Where you’re born or live shouldn’t determine your future, but for too many people, inequality squanders human potential. We need to clearly see the fundamental unfairness and dangers of highly unequal societies, and we must take action to help more people enjoy the freedoms to live a full and healthy life.

While Oxfam has long focused on global inequality, inequality within the US remains a huge challenge. For workers in many states across the South, low wages, a lack of workplace protections, and prohibitions against organizing unions are worsening inequality.

But there’s hope for the future. For the last five years, Oxfam has produced the Best States to Work Index to track how states protect, support, and pay workers. Workers are demanding and winning change, organizing to form new unions, elect more helpful lawmakers, and press for changes in state laws. 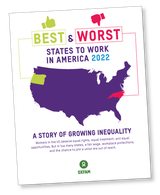 Where does your state rank?

Find out in our 2022 Best and Worst States to Work in America rankings, as featured on Season 2, Episode 3 of "The Problem with Jon Stewart" on Apple TV+.

Best and Worst States to Work in America

Thank you for your interest in our Best States to Work rankings. We're excited to keep you informed about ways you can partner with Oxfam to fight global inequality to end poverty and injustice.

What billionaires and giant corporations pay in taxes—and what that means for the rest of us.

Best and Worst States to Work in America 2022

Oxfam’s rankings are out: How well does your state support workers, working families, and working women?