Oxfam’s poultry campaign, launched in 2015, targets the top four US poultry companies: Tyson Foods, Pilgrim’s, Perdue, and Sanderson Farms. Tyson Foods, the largest poultry company in the US, recently announced new and expanded commitments to improve conditions for its poultry workforce. These commitments are thanks to the work Oxfam and a broad coalition of organizations have done to expose the harsh realities inside poultry plants in the US, applying public pressure on the industry to set new workplace standards.

Now Perdue must step up to the plate and take similar steps to improve working conditions.

Perdue is the third largest poultry producer in the US. In interviews, Perdue workers all report the same problems that plague workers in poultry processing across the country: low wages, elevated rates of injury and illness, denial of bathroom breaks, and lack of worker voice that leads to a climate of fear.

Perdue: It’s past time to improve conditions for your workers. 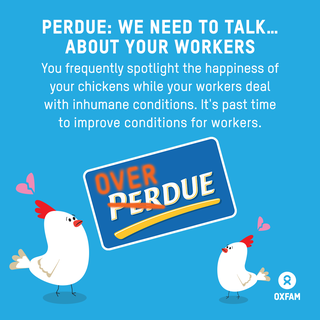