How Oxfam’s Sisters on the Planet ambassadors are elevating the voices of people from the region to change US policy and deepen understanding of the migrant experience.

On International Women’s Day in 2019, Rebeca Alfaro—a Salvadoran woman who came to the US with her two young daughters—walked up to a microphone at a Washington, DC hotel to share her story.

In the audience were 40 Oxfam Sisters on the Planet ambassadors, on the cusp of talking to their members of Congress about why families like hers were fleeing Central America in search of safety at the US-Mexico border.

In halting, tearful words, Alfaro told the women about the gangs who killed her husband and mother more than a decade earlier for speaking out against violence.

“I came here from El Salvador, fleeing the gangs because they were threatening my life,” she said. “They killed my mother and my husband. That’s why I decided to come to this country.”

Alfaro’s story crystallized why their advocacy that day on Capitol Hill mattered. And for a particular group of Sisters, her words inspired a longer journey—one that would take them to El Salvador and Honduras and back again. Their mission: work with Oxfam to amplify the voices of the women and gender-diverse people trapped in a decades-long cycle of violence and poverty—only made worse by the latest, shameful chapter of American history.

“This isn’t an anthropological tour of a white savior coming through to sweep down and tell the world about what they saw,” said Kiah Morris, a Sisters on the Planet ambassador and former Vermont state legislator, just days before she boarded a plane to San Salvador, El Salvador. “This is about us hand-in-hand with our sisters across the globe saying that we don’t find this life acceptable.”

The urgency for this journey began building well before Alfaro’s powerful words.

Six months after the US Department of Justice announced its “zero-tolerance” policy that would separate nearly 3,000 children from their adult family members at the US-Mexico border, a migrant caravan of mostly women and children departed from San Pedro Sula, Honduras in October 2018.

Many were fleeing violence, poverty, and instability—risking their lives as they made their way north. But instead of welcoming them, the Trump administration deployed more than 5,000 active military troops to the border.

The situation soon worsened. Within a month’s time, administration officials proposed that migrants only be allowed to seek asylum at official ports of entry. By January 2019, the Remain in Mexico policy was forcing asylum seekers to survive in dangerous border areas of the country as they waited for their asylum requests to be heard. By March, the administration had directed the State Department to cut all foreign aid to Central America.

The Sisters knew they wanted something to change. They decided it was time to go to El Salvador and Honduras to learn more about why people were fleeing and what Oxfam was doing about it.

“You will always be with us”

In October 2019, six Sisters spent over five days with Oxfam partners and allies in El Salvador and Honduras. They saw up close how Oxfam is bringing together activists, government leaders, and nonprofit groups to tackle the underlying causes of forced migration from Central America.

At a discussion with women parliamentarians in San Salvador, Sisters talked with legislators from El Salvador’s three major political parties about their work with Oxfam to unify around a common agenda for women’s rights.

By pushing for resources to invest in programs that address gender-based violence and improve education through a nationally recognized committee on women and gender equality—one of the few of its kind in Latin America—the work challenges a patriarchal system of male dominance and helps women build their communication skills, reach consensus across political divides, and make real national laws on the books that prohibit gender discrimination and violence against women.

“If we give women real opportunities for employment, they would be the last ones to migrate,” said America Romualdo, coordinator of the Prudencia Ayala feminist collective.

Sisters also visited the Shaira Ali Center for the Holistic Care of Children for Equality. Since 2012, Oxfam has supported community-led efforts to create safe spaces for girls, boys and adolescents from 12-17 years of age. Now working across 29 different communities, leaders like Marta Sanchez have trained more than 400 women from the local government on violence prevention and taught women how to recognize if they are survivors of domestic violence.

Their new goal is to train 100 women on entrepreneurship, human rights, and the rights of women and girls with the hopes that each participant will train 10 more women.

“The work that is being done at the Center with the help of Oxfam is remarkable,” said Sisters on the Planet ambassador and former Florida state legislator Annie Betancourt. “It’s restoring the dignity of women. This is community organizing at its best.”

In Tegucigalpa, Honduras, Sisters paid a visit to the Oxfam-supported “Quality of Life” domestic violence shelter where they met three survivors of domestic violence—Leticia, Heydi, and Esmeralda. Each shared their story about finding safety at one of the few shelters that exist after enduring years of psychological and physical abuse.

At a time when 95 percent of the cases of domestic violence in Honduras go unresolved, the shelter was a lifeline where they and their children were able to find emotional and legal support. With Oxfam's support, the shelter has trained 85 case workers on crisis support, the legal rights of women, and how to file cases against perpetrators of violence to support more women in need.

“We will fight for you and your children and your sisters and your neighbors,” said Danielle Adams, a Sisters on the Planet ambassador and Soil and Water Conservation District Board supervisor in Durham, North Carolina. “I don’t know what the answers are, but I know I won’t ever stop fighting for you. You’re my sisters too and I love you. And I’m so sorry that this happened to you. But we will take this back with us. You will always be with us.”

Just two months after their return, the Sisters began to get to work. They made plans to go to Capitol Hill and build support for legislation in Congress designed to address the root causes of forced migration from Central America and end the humanitarian crisis at the US southern border.

Known as the Northern Triangle and Border Stabilization Act—authored by Rep. Zoe Lofgren, D-Calif—the bill would combat corruption, strengthen the rule of law, tackle extreme poverty, and fund civil society organizations that counter sexual, gender-based, and gang violence in communities across Central America. It stood alone as the most ambitious and comprehensive legislative solution to fix the problem.

On a busy day last December, Sisters, Oxfam staff, and actor and Oxfam supporter Luke Baines met with Congressional leaders including Speaker of the House Nancy Pelosi to share the stories of the people they had met. Carrying photos of Marta, Leticia, Heydi, Esmeralda, as well as the mother of slain Honduran human rights activist Berta Cáceres, they asked their representatives to co-sponsor the bill to build support for changing US policy toward Central America and champion human rights.

“[It is important to fight] because things just seem to move so slowly in Washington and Congress, especially anything progressive,” said Mary Jo Kilroy, a Sisters on the Planet ambassador and former Congresswoman from Ohio. “It almost seems to take a session of almost getting there until you can bring it back up the next time.”

Thanks to their work with Oxfam, there are now 60 co-sponsors in the House of Representatives for the Northern Triangle and Border Stabilization Act. The larger Democratic caucus is now discussing its plans to move the bill, and Oxfam will continue to work with Sisters and Congressional leaders to build support on Capitol Hill for bold policy change.

“I’ve learned in my life that the best way to deal with things is through action,” said Alejandra Schrader, a Sisters on the Planet ambassador and chef and sustainability advocate. “What I’ve learned and heard is just serving as fuel to put into action what in my heart feels right—to help the cause and to continue to push the agenda with Oxfam.”

Take action with our Sisters on the Planet ambassadors. 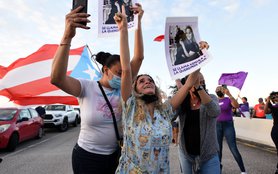