In the Occupied Palestinian Territory (OPT) - the West Bank, including East Jerusalem, and the Gaza Strip - nearly a quarter of the people live below the poverty line. Their prospects for being safe, healthy, and able to work and learn is severely limited by the Israeli occupation. Fifty percent of the population rely on humanitarian aid, and almost two million people are trapped inside Gaza with little access to the most basic services. 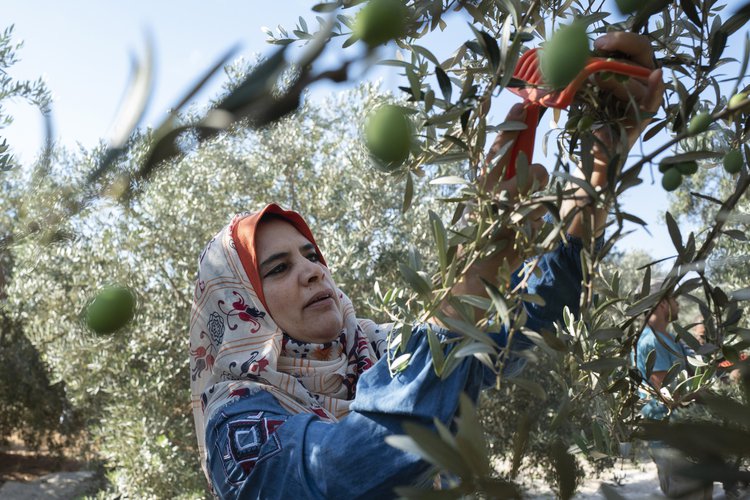 Make a donation to help people affected by conflict and struggling to survive in the Occupied Palestinian Territory and Israel.

Oxfam has been working in the region since the 1950s and established a country office in the 1980s. We work in the most vulnerable communities in Gaza, East Jerusalem, and Area C --  the 61 percent of the West Bank where the Government of Israel maintains full military and civil control under the 1993 Oslo Accords.

In total we work with more than 60 Palestinian and Israeli partner organizations, finding ways to improve these communities’ rights and opportunities to work and support themselves.

In response to the escalation of violence in Jerusalem and Gaza in May 2021, Oxfam is already working with partners to provide people with immediate life-saving clean water, hygiene kits, and cash to help them buy food and other essentials, and to restore destroyed water systems. We aim to reach an additional 282,000 people.

In response to the COVID-19 pandemic, Oxfam is working with local partners to provide beds and hygiene kits to quarantine centers in Gaza, as well as protective equipment, hand-washing facilities, and sanitization equipment for 750 medical staff. We are also working with the World Health Organization and UNICEF to support a public health campaign across the Occupied Palestinian Territory.

In the West Bank we advocate for the rights of communities to stay on their land, and we promote the rights of women and marginalized groups to participate in decisions that affect their lives. We also help olive farmers improve the quality of their produce and get it to markets, and support herders to care for their animals.

The Israeli blockade has been in place for over a decade and follows years of policies that served to isolate the Gaza Strip and the people living there.  The blockade has devastated Gaza’s economy, caused widespread destruction and left most people largely cut off from the outside world.

Eighty percent of the population relies on humanitarian aid to survive. People struggle to access clean water, food, medical care, education, and to repair and rebuild homes damaged in multiple cycles of violence.

Many key industries have been decimated and more than 60 percent of youth are unemployed - the highest rate in the world.

Working with partners, our humanitarian and development program helps around 217,582 people in Gaza affected by the crisis and impoverished by the Israeli blockade.

We work with farmers and fisherfolk who are prevented from making a living. We supply safe water and sanitation, help local farmers improve the quality of their produce and get it to market, work with local civil society to advocate for their rights, and have provided emergency aid during military escalations and floods.

We campaign for lasting peace, security for all civilians, and an end to the blockade.

What is Oxfam's position on the conflict?

Oxfam calls for a comprehensive negotiated solution based on international law and we support the two-state solution called for by the international community. We condemn violence against civilians on all sides and believe that both Israelis and Palestinians deserve to live in dignity without fear of violence or oppression.

Why is Oxfam against settlements?

Israeli settlements in the West Bank are widely recognized by international governments as a violation of international law and a major obstacle to peace. In our daily work we see the negative impact of Israeli settlements on the lives and livelihoods of Palestinian businesses, farmers and herders. These settlements are a major cause of Palestinian poverty and the denial of rights which we try to address in our work. Settlements continue to expand across the West Bank – in the past 20 years the settler population has more than doubled to more than 520,000 today. This has resulted in the confiscation of Palestinian land and resources and has fueled poverty. Settlements also threaten the viability of a future Palestinian state, leaving the West Bank carved into 167 disconnected enclaves. Oxfam supports the two-state solution but settlements are a direct threat to that solution.

But settlements also provide jobs for Palestinians, don’t they?

The occupation, of which Israeli settlements in the West Bank are a large part, is a cause of poverty. According to the World Bank, restrictions on Palestinian access to Area C – the 61 percent of the West Bank that is under full Israeli government control and where most settlements are located – cost the Palestinian economy about $3.4 billion a year.

Unemployment in the West Bank has increased as a result, with nearly one in three working age Palestinians under 29 unemployed. Some Palestinians do find work in Israeli settlement farms and factories, but this is often because they are restricted from pursuing other livelihoods and have little other choice.

Oxfam works with olive farmers and animal herders living near settlements across the West Bank. They are prevented from accessing parts of their land and receive much less water per person than Israeli settlers. Palestinians in Area C require Israeli permits to build new homes, wells, irrigation systems or animal shelters, but more than 95 percent of Palestinian applications are rejected. At the same time, Israeli settlements continue to expand.

Around 800,000 olive trees have been uprooted, and in the past year more than 660 Palestinian homes and property have been demolished. Palestinian olive oil production alone has dropped by 40 percent in the past decade. Unable to make a living on their own land, the only option available to many Palestinians is often settlement factories and farms which receive support from the Israeli government.

Does Oxfam support a boycott of Israel?

No. We oppose trade with Israeli settlements in the West Bank because they are illegally built on occupied land, increase poverty among Palestinians, and threaten the chances of a two-state solution. However, we are not opposed to trade with Israel and we do not support a boycott of Israel, or any other country.

We do not fund activities that call for a boycott, divestment or sanctions. Oxfam believes that a vibrant civil society is the best way to overcome global poverty and injustice, and we know that a strong civil society will have many different opinions and approaches. We work with more than 30 diverse Israeli and Palestinian partners and we do not expect that all of them agree with us on all policy issues. Some of them may support a boycott, but we do not fund this part of their work.

Oxfam also does not fund or support any organizations that promote anti-Semitic or any other discriminatory practices, or advocate violence. We believe that trade with settlements, or companies located in settlements, contributes to legitimizing their presence and denying the rights of Palestinians. We promote ethical consumption and we support the right of consumers to know the origin of the products they purchase. Therefore we urge the Israeli government to ensure proper labeling of Israeli products and of settlement products so that consumers can differentiate between them.

You can help: Make a donation to help people affected by conflict and struggling to survive in occupied areas. 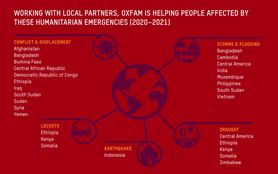 Here’s a brief update on some of the emergency work Oxfam supporters made possible this year. 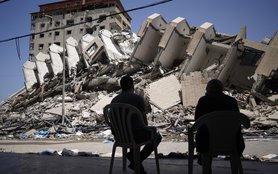