In the last few days, the Syrian government and their armed allies have retaken the last remaining neighborhoods of East Aleppo, which had been held by opposition forces for four years.

Yesterday, an agreement was made to allow for civilians and fighters to evacuate safely. The deal quickly dissolved, however, and civilians are still reporting shelling and do not feel safe attempting to flee, especially after reports that dozens of civilians, including women and children, have been executed by pro-government forces. 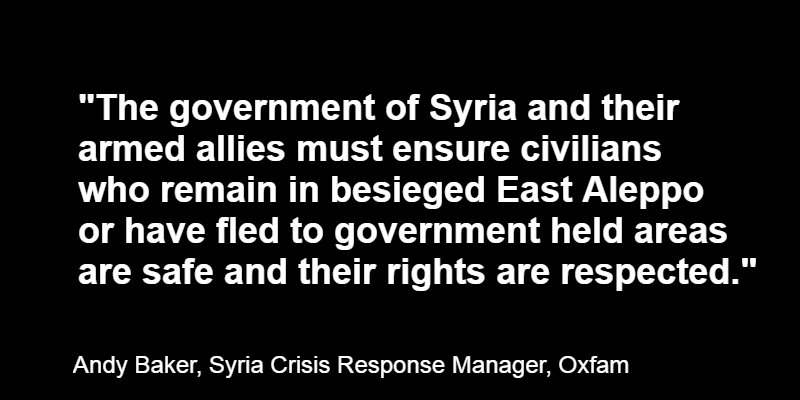 The UN has called this a "complete meltdown of humanity." Many still caught in East Aleppo have released heart-wrenching pleas on social media, saying their farewells and asking for the world to help or at least bear witness.

The Government of Syria and their armed allies must ensure civilians who remain in East Aleppo or have fled to government held areas are safe and their rights are respected. There must be no reprisal attacks, arbitrary detention, extrajudicial executions, or disappearances under any circumstances.

The Syrian authorities must ensure that any security screening processes or detention is transparent and monitored, preferably by the International Committee of the Red Cross (ICRC) or another independent third party, and that no civilians are treated indiscriminately as fighters or “terrorists."

Oxfam is a global movement of people fighting inequality to end poverty and injustice. Together we offer lifesaving support in times of crisis and advocate for economic justice, gender equality, and climate action.

Nearly one out of every three of us lives in poverty. But we see a future in which no one does. Explore our work to see how.

Where does President Obama rank on inequality?