For decades, ethnic tensions and disputes over land and resources have forced countless people from their homes in the eastern provinces of the Democratic Republic of Congo. Oxfam builds and repairs of water systems in communities that host displaced people and we advocate for people's right to be protected from violence and exploitation.

In the eastern provinces of the Democratic Republic of Congo, the absence of a strong state authority has allowed violence and conflict to spin out of control as ethnic tensions and disputes over resources flare. The ongoing volatility has forced many families to flee their homes to seek safety in either in camps for displaced people or in host communities, where Oxfam has helped to meet their emergency needs.

In camps in Congo and at a transit center in western Uganda, to which many families have fled, Oxfam has provided clean water and sanitation services, including the construction of latrines and bathing stalls. In Uganda, Oxfam has continued to coordinate hygiene initiatives aimed at preventing the outbreak of waterborne diseases. Oxfam also intervenes in villages to which displaced people are flocking, working to provide healthy water and sanitation facilities to both host communities and the newcomers.

Through our protection programs in North and South Kivu, we aim to strengthen the ability of people to advocate for their rights, including the right to protection from violence and exploitation. Our longer term work on water, sanitation and hygiene in the western part of the country aims to strengthen the resilience of local people. 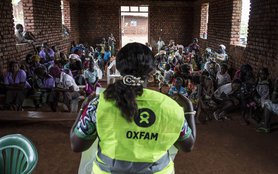 Women at the front lines of Ebola response

What is Ebola? We answer all of your questions about Ebola and how we're helping fight its spread.

Ebola—it’s a word that strikes fear. Perhaps that’s because it’s an unfamiliar virus, one that moves quickly, is contagious, and here in the US, we haven’t had much contact with it. As an outbreak claims lives in the DRC, we breakdown what Ebola is, what’s happening in the DRC, and what Oxfam is doing to help.

Unity is strength: How one woman found the strength to survive—and speak up

Change is afoot in the eastern provinces of the Democratic Republic of Congo, where women are finding new power in working together to confront the challenges of life in an unstable region.

Some disasters can’t be prevented—or imagined in advance. But as soon as they strike, Oxfam needs to be ready to respond. Lives depend on it.

Your gift to Oxfam’s Saving Lives 24/7 Fund will go directly toward our emergency work, present and future, so that when crises erupt, we're ready to spring into action.