In reaction to President Trump’s address at the United Nations today, Abby Maxman, President of Oxfam America, made the following remarks:

“President Trump's boasting may have elicited laughter in the room, but these stakes are no laughing matter. With more people displaced than ever before, and as humanitarian crises and extreme weather events strain resources and diplomacy, this is not the time for America to turn further inwards.

“Today, President Trump doubled down on his administration’s narrow and defensive approach to international relations at the UN, seeking only to work with nations whose leaders agree with him, instead of demonstrating true leadership and addressing the needs of the most vulnerable people around the world.

“US foreign assistance is not the President’s personal charity. It is from the American people and an expression of our values that is meant to transcend politics and petty grudges. Such vindictive antics might be intended to score short-term political points, but they will cost dearly for the most vulnerable among us.

“Especially at this time of unprecedented global crises—with more people forced to flee their homes than since World War II, inequality reaching staggering heights in developed and developing countries alike, and the effects of climate change threatening to alter the very face of this planet we all call home—we must not turn our back on the international order. Nations must work together to solve the problems they can’t solve alone.

“And while his words focused on the dire situation of people fleeing violence around the world and those seeking refuge at our southern border, his actions show a lack of compassion, as he separates families and seeks to cut funding for all refugee programs.

“President Trump’s assertion that Saudi Arabia and the UAE are helping to end the suffering in Yemen would be another laugh line if it did not have such deadly and tragic consequences for Yemen’s people. In reality, Saudi Arabia and the UAE, along with the Houthis, other parties to the conflict, and their supporters such as Iran and the U.S., all share responsibility for the world’s largest humanitarian crisis.

“Today, President Trump did not show democratic, principled leadership or any support for the the kind of rules-based international cooperation that makes our country and our world safer and more prosperous. Instead, by denouncing an ‘ideology of globalism’, he continued to push his zero-sum false choice between American patriotism or the rest of the world. Any reasonable person knows that they are not mutually exclusive and that in fact the short-sighted, bullying Trump America First approach only weakens us and makes the world and the United States more fragile and less stable. 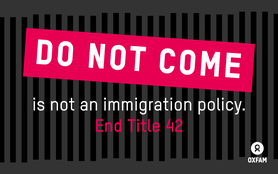