More than half (54%) of all households seeking charitable food assistance from the Feeding America network include at least one member who had employment in the past year, according to a recent study released by Feeding America® and Oxfam America® ahead of the Thanksgiving holiday season. All told, approximately 25 million people live in these households. The study details the challenges that many working Americans face in providing enough food for their households. Feeding America is the nation’s largest domestic hunger-relief organization and Oxfam America is an international relief and development organization.

Recent economic growth has resulted in improved circumstances for some individuals and their families, but its benefits have excluded many others, including the more than 17 million American households facing food insecurity. Many of these households have working members whose wages are too low to support themselves and their families.

The report seeks to further understand the circumstances of and struggles experienced by working households that seek charitable food assistance from the Feeding America network through additional analysis of data collected for Hunger in America 2014. Many households, even those with an employed member, report minimal incomes and challenges meeting their basic needs.

“This more extensive dive into the struggles facing our working clients helps illustrate that even those who can secure some employment are making difficult choices, between paying for rent, utilities, healthcare and enough food for their families,” said Bob Aiken, CEO of Feeding America. “We hope this study will provide a clearer picture of some of the obstacles facing so many of the 46.5 million Americans we serve each year.”

“It’s shocking to see how many Americans go to work every day but then must still stand in line at the food pantry to feed their family,” said Raymond C. Offenheiser, president of Oxfam America. “This Thanksgiving, millions of hard working families will gather to share a traditional meal together; yet, despite having full-time or even multiple jobs, the money they bring home is not enough to regularly put food on the table. America has always valued hard work and should continue this tradition by recognizing the needs of working families and supporting an increase in their wages."

Key statistics from the report include:

From Paycheck to Pantry: Hunger in Working America documents the continued struggles that low-income American families face in accessing adequate food and nutrition. A combination of limited income, underemployment, and competing household expenses exhibit the need for viable support systems for these families. 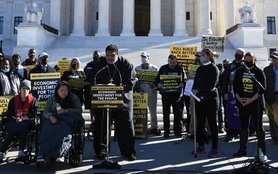