WASHINGTON, DC — Ahead of the Annual Meetings, international agency Oxfam urged the World Bank to sharpen and swiftly move forward on the new strategy to end poverty by 2030 and boost shared prosperity. Oxfam also called on the International Monetary Fund (IMF) to heed the lessons of recent austerity policies in Europe, and in Latin America and South Asia in the past, and clarify the role it intends to take in the debate on international taxation following the G20 in Saint Petersburg.

"The World Bank's new strategy is a welcome development in an agency that has often worked in silos with no connecting thread of vision," said Nicolas Mombrial, head of Oxfam's Washington office. "But now is the time to move from rhetoric into action and develop concrete plans to bring the strategy to reality."

Oxfam praised the strategy's recognition that ending poverty is not just about income but a fuller dimension of wellbeing, as well as its intent to mainstream the fight against climate change, but urged an increased profile on health and education and a stronger focus on reducing the gap between the rich and poor. Oxfam also called on the World Bank to ensure its private sector works benefits the poorest.

As efforts to revive the global economy continue, Oxfam cautioned the IMF that pushing austerity—even softened austerity policies—will only make things worse. In a recent report, Oxfam warned that an additional 25 million people across Europe could face the prospect of living in poverty by 2025 if austerity measures continue.

"The IMF should learn from the ruinous structural adjustment policies it imposed on Latin America, South-East Asia, and sub-Saharan African in the 1980s and stop promoting austerity policies, even if softened," continued Mombrial. 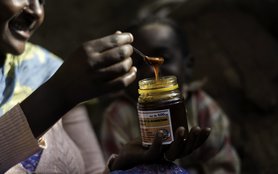 The sweet taste of financial independence

A honeybee project in Ethiopia provides women with an education in job skills, literacy, and accumulating savings.