Missouri Western State University student and Oxfam CHANGE leader Andrea Gordon on what the next US president must know about why she's up at 4:06 in the morning.

Dear Future President: Listen to Andrea's powerful words as you read her letter below to the next US president. 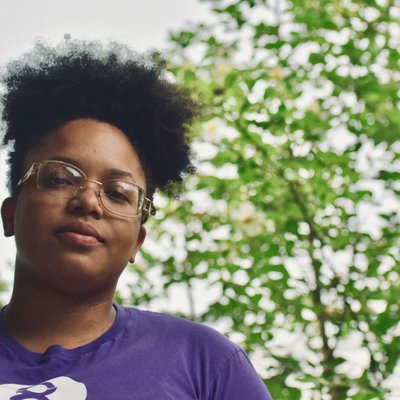 Dear Future President: Listen to Andrea's powerful words as you read her letter below to the next US president.

Its 4:06 in the morning, and I’m up writing to you now. Mainly because, honestly, I don’t know how much time I have left.

You see I love my country but most days I feel like it only tolerates me.

Imagine dying today because your heartbeat isn’t enough when your skin is black. Imagine being followed around the store, 10 times more likely to be pulled over, bullied because of your religious beliefs, hated because you believe that love is love, hungry because your family can’t afford to eat.

Future President, I love my country. But these scenarios are parts you may not see.

Did you know I had to finally accept that every day my fate can be determined by my race? Did you know that where I’m from, white people still begin conversations with “Well I’m not racist, but ..." whenever they are about to openly offend me by touching my hair as if they've known me for years or pretending to relate to my struggle as if they’ve cried my tears and shared my journey?

Future President, you see I love my country but young girls are missing and it feels like no one is searching for them. Sixty-four thousand women who look just like me have been reported missing. But no one’s paying attention. Where I’m from sex trafficking has become more common. Women are still overlooked, underpaid, and looked to last for positions of power while being the first in—last out and still somehow figure out how to have dinner waiting at the house.

Future President, I love my country but where I’m from little brown boys like young Mike Brown are shot down. You know his Dad told me they left his son's body in the middle of the street for all of Ferguson to see. I’m afraid for my nephews. I never want them to have Nerf guns because Tamir Rice still lives in my heart. I’m scared that my brother may get “pulled over” while his car is already parked and there’s no cameras which means no proof and then an officer's eyes go dark.

Future President, I love my country, but sometimes I feel like it doesn’t love me.

Speaking of love you know how our country loves meat? Somewhere overseas are produce farmers that work for our corporations that deserve reparations. Working day in and out to guarantee they take care of America's needs but don’t receive equal wages, can’t afford to feed their families, they're dying in fields due to dehydration. Future President, would you agree that food shouldn’t be a privilege? Or that clean water should not be a delicacy?

I know I’m talking a lot and I’m not trying to bombard you with questions it’s just that I don’t know how much time I have left.

The time is now 4:32 and I am trying to close this letter to you. But I don’t think there is an envelope large enough to fit my concerns. So many condolences just this year alone Future President our country needs help. How is it that so many of our people are poor but it’s said our country holds the most wealth? One time, during this training in Boston, a group of people taught me that our issue isn’t “too many people and not enough resources." They said that it’s enough resources but it’s how disproportioned said resources are...

Dear Future President, my time within these words have come to an end. But as a P.S. please consider the lives of your future citizens.

Please consider climate change a big deal, missing person cases as if it was your own blood, reforming this judicial system that’s allowing murderers to go free because they hold badges and that brown boy made him or her nervous. Future President, please know that there are inner city youth depending on you to advocate for more money in their schools, please consider plans to treat refugees as if they helped build this country. Treat them as if the America we live in has been a melting pot since the beginning of its creation. I’m just saying—this nation is one that has thrived due to intersectionality and diversity.

Triple your vote this November by making sure three friends, family members, or neighbors vote.
Find out how