Oxfam teams are ready to respond in India and worldwide. Your monthly gift can help save lives immediately in times of urgent need.

Your monthly gift can help save lives immediately.

Oxfam and our partners are helping young people to push their elected representatives to improve education, reduce youth unemployment, and help farmers make a decent living. Could this bring ina new era in Ghana’s democracy?

“I usually have an epiphany when I am performing on stage,” says Elom Adablah, one of Ghana’s most famous recording artists. He had one at an outdoor concert in Accra in 2016, when he held up a one Ghana cedi note. “Look at this, it’s a symbol of who we are, it’s our future, it’s a symbol of our unity,” he said to the young people in the audience.“When you see a one cedi note, remember that we are one Ghana.”

Adablah, 31, and known as “E.L” in Ghana, performed at this concert to promote the PARTICIPATE campaign, which mobilized youth to vote in Ghana’s presidential election.

E.L’s message was simple: “Youth have a responsibility in a democracy to speak out, talk to those in power, to take action, and to lead. And I want youth to know that we need to be unified.”

E.L: State of the Nation Address

Lyrics:
Yeah
This is my state of the nation address
There's no hating
I'm just stating the facts
Updating the masses on the situations that we facing I guess
We can accept it's complicated at best
In these hard times of elevated prices
Energy crisis
Load shedding plan got your destiny decided
It's only right no matter how facetious it sounds we learn the truth beyond reasonable doubt
Ladies and gentlemen allow me to state for the record
I am a citizen
Unwilling witness of the condition in which we living in
A living testament of civilians who are innocent
A critic of the system for what it is and should've been
It should've been a Paradise for the world to envy
But it's hard when all your capital reserves are empty
The rich get rich chase girls in Bentleys
The poor die cross sign preacher man screaming Amen
Give it to God mama
Give it to God
He gon come down one day on a beautiful horse
If you dey hung ebi he dey put the food for the mouth
Make you no talk go your job and play the fool for your boss
Cos you graduated college now you wish to work and pay dues
Looking up to the government to help and aid you
After service your bank account isn't operational
As empty as the promises the politician made you so
How do we stop it getting worse than ever?
Put our differences aside and try to work together
Reassess our methods for more effective measures
Better manage our resources reinvest our treasures
Instead of bickering we been complaining for years who do we blame for this state of affairs I blame us
If we have the power we make them do what they must
Demand accountability stepping our game up
They said a billion dollars it's gonna cost a billion dollars to solve our present and our imminent problems
Listen we've been borrowing from the beginning in Ghana nothing change
We still leaving in darkness
Chale isn't it bonkers
How corruption is tearing apart the very fabric of society the damage is done
Where officers work in airports are begging for funds
The policeman at the checkpoint collecting his one stretching his hands through my window other hand on the gun
To get that 2 cedis fixed and it's happening right now!
Street kids go without a pot to piss in
Minority leaders pointing fingers in opposition
Wow
See for me I have to write some rhymes or resort to a life of crime
There's no industry I fight for mine
I swear we'll never see the right design till we decide to reunite our mind
So stand up for Ghana stand up now this is your birth right
Us against opression and suffering is a fair fight
Stand up against tribalism and impaired sight
Fight for your right to rise you deserve a fair life
Chale we dey complain for years who do we blame for this state of affairs I blaming us chale
I guess what I'm saying is one love chale
One us chale
Good luck chale

State of the nation address 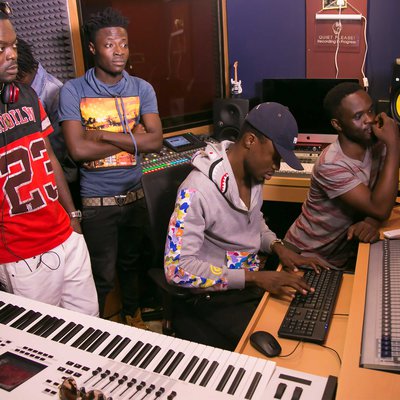 E.L (at keyboard, in hat) and other notable artists in Ghana at a recording session for the PARTICIPATE campaign song.

Youth and poverty in Ghana

Ghana is one of the more stable and democratic countries in West Africa. However there is vast inequality in the country of 28 million – people in rural areas are considerably more impoverished than in the cities, and have not benefitted from economic growth from mining and petroleum. Despite employing nearly half of Ghana’s workers, agriculture only makes up about 20 percent of the country’s economy. Unemployment among youth is very high in Ghana –a problem because like so many countries in Africa, most of the population is young. Recent low oil prices have led to a rising public debt in Ghana, further limiting opportunities for youth.

What can improve the prospects for young people in Ghana? Oxfam and partner MUSE (a social engagement media brand) considered the 2016 presidential campaign, and asked how youth could get commitments from candidates to improve education, help small-scale farmers, and decrease youth unemployment. The campaign was non-partisan, and concentrated on the issues – the idea was to encourage young people to get involved and vote.

It was an audacious idea. Young Ghanaians are expected to defer to their elders. “There’s an expression in Ghana: me baaye akye, which means ‘I’ve been here longer,’” says Ruddy Kwakye, CEO of Muse. “It’s something that elders say to young people: Youth should leave things to those in their 60s and 70s… and older. In politics, you have to wait your turn.” This attitude discourages young people, Kwakye says. “They just say ‘even if I talk, they won’t listen, it’s a waste of time.’” Lack of political engagement by youth just makes it easier to ignore their concerns, making poverty more likely for young people.

A key element of the PARTICIPATE campaign was a series of televised youth town hall meetings that offered young people in the audience an opportunity to speak about their concerns directly to representatives from political parties. This video is one of the broadcasts that included Naana Akosua Hanson as host and E.L as a panel participant.

Oxfam is helping young people in many countries to speak out. In Peru, youth have some of the same concerns as young people in Ghana -- jobs, health, education, and the environment -- and they are using a social media platform called “Actua.pe,” started by Oxfam, to get information and communicate. It’s playing a key role in social movements across the country.

Actua.pe is helping activists complement their campaigns with a presence in the digital world, according to Elena Mejia (right), who three years ago participated in massive youth protests in Lima against unfair labor laws. At that time, she says they faced a problem of credibility: “Media and society said we were manipulated and misinformed,” she says.

Mejia, now 29, says youth activism has changed since Oxfam and other social justice allies in Peru have established Actua.pe. It’s a way to share information via social media channels like Twitter and Facebook from researchers and journalists on major policy change debates in the country that are important for fighting poverty. Actua.pe was also created to assist civil society groups in tracking issues that came up in the presidential election of 2016, like helping communities recover from massive flooding in 2016 earlier that year, protecting Peru’s fragile environment, and dealing with corruption and other social ills.

It’s a powerful tool young people are now using to push their elected representatives for accountability, and was a dynamic source of information during the ongoing constitutional crisis starting in late 2017 when Peru’s President Pedro Pablo Kuczinsky abruptly pardoned imprisoned ex-President Alberto Fijumori, and was later forced to resign amid a corruption scandal.

In addition to sharing information on Actua.pe, Oxfam and its allies also organize training “labs” where activists meet, share ideas, and organize. “Having information to back up our activism is important,” Mejia says, “we can say we’ve studied the issue; Oxfam’s help with research and data is really important.” She says the labs bring together activists of all ages working on women’s rights, the environment, economic inequality, labor, and health care from across Peru.

Working together, with hard, credible research to back up their demands, will make a difference, says Mejia. “When you give information to young people, it can be dangerous for those who don’t want us to be informed, and to fight for our rights.” 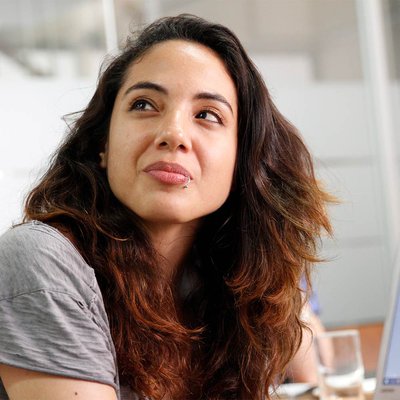 PARTICIPATE organized town hall meetings, bringing youth together with candidates and their representatives, to help young people articulate their concerns directly to those seeking their votes. Naana Akosua Hanson, a well-known 27-year-old radio and television presenter, was the host of several of these televised events. “It was great because we don’t have town hall events here, it’s not a thing. But PARTICIPATE gave the youth a voice, to speak directly to their leaders about their problems.”

In addition to town hall meetings, PARTICIPATE organized groups of young business leaders to meet with candidates. The campaign engaged artists like E.L and others who performed in concerts and recorded a campaign song. PARTICIPATE convened youth leaders to document their policy recommendations on training for young entrepreneurs, how the government should spend revenue from mining, and improvements in education that would better prepare graduates for employment.

The campaign communicated much of this in an active social media campaign on Twitter and Facebook during the campaign, and then shared photos of young people displaying an inked pinkie finger on election day, indicating they had cast their ballot. Fear of missing out compelled others to go to the polls, and do the same.

There’s an expression in Ghana: me baaye akye, which means ‘I’ve been here longer.’ It’s something that elders say to young people: Youth should leave things to those in their 60s and 70s… and older. In politics, you have to wait your turn.

When election day came and went in December of 2016, voter turnout was about the same as previous elections (73 percent), but “there were more young voters registered than ever before,” according to Kwakye.

“The election results were influenced by youth in ways they had not been previously,” says Richard Hato-Kuevor, Oxfam’s program manager in Ghana. He points to one of the first acts by President-elect Nana Dankwa Akufo-Addo: elimination of all fees for attending high school across the country.

“We’re in a new age,” says Frank Gyimah, 26, who works at a PR agency in Accra. He participated in televised panel discussions with candidates during the presidential campaign. “This country has a big future, especially if creative young people can be involved in decisions. Young people are moving to the center of the discussion, and holding politicians responsible.”

Read more stories about the power of people here.